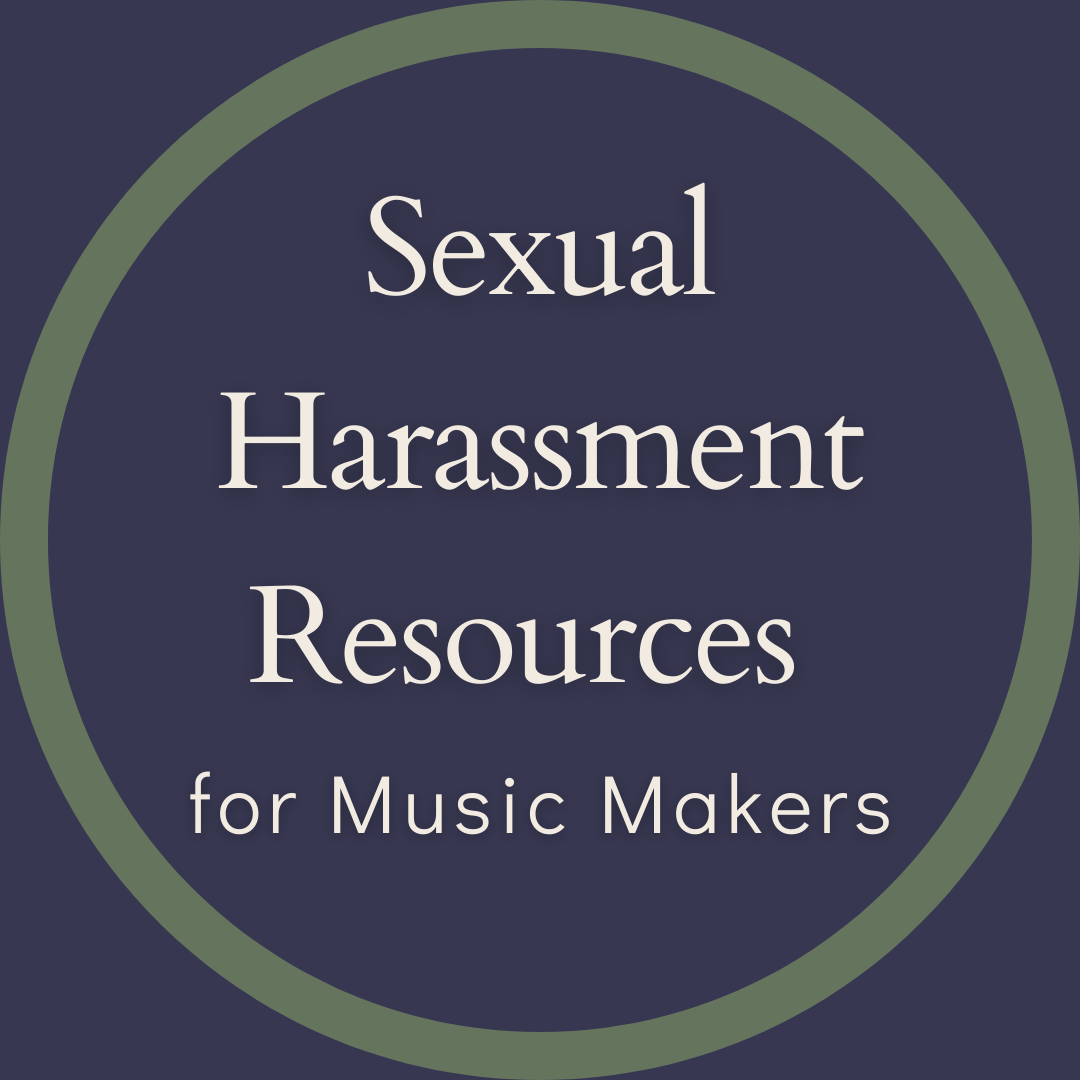 Sexual harassment and assault remain all too common in the theatre industry. While sexual harassment can be experienced by anyone, cases involving women and nonbinary individuals are more than double that of men.

A survey by Cosmopolitan in 2015 found that seventy-one percent of women do not report sexual harassment because they fear retaliation. Seventy-five percent of people reporting sexual harassment do face some retaliation, including being fired, yet bystanders rarely report the harassment they have witnessed. If we want this to change, we all need to take responsibility. If you see something, say something.

In recognition of Sexual Assault Awareness Month, Maestra has compiled a list of resources for anyone who has experienced unwanted sexual advances in the workplace.

Resources for Music and Theatre Professionals

The American Association of University Women has conducted several national surveys about sexual harassment in schools and on-campus that show it to be a widespread problem. More than sixty percent of college students experience sexual harassment, according to a survey for AAUW’s 2006 report Drawing the Line.

Maestra Stands with The Lillys’ Statement Of Principle

“No one should be forced to choose between her personal safety and dignity, and her job. But too often in the theater community, this is exactly the choice that women must make. Sexual discrimination and harassment and gender-based violence often occur in the intimate and physical context of a theater production.

Victims of such conduct face a stark choice between continuing to work in close collaboration with their abuser and quitting the show. Few can afford to give up a job and lose not only income but also the opportunity for career advancement. There is a sense in the community that it is not necessarily in a victim’s best interest to report abuse because of fear that the response will be insufficient and open her up to retribution.

In addition, many instances of abuse happen outside of the physical boundaries of a theater. No theater, union, or guild currently takes responsibility for handling such cases. However, the two people involved will most likely have to work together the next day or in another production, and the victims are left to deal with the aftermath by themselves. In the face of these realities, victims often choose silence and the abuse is allowed to continue. It is time for the theater community to break its own silence on harassment and abuse and formally address the problem.

The reality is that those who behave abusively are generally in positions of power. Artistic directors hold the power to employ, playwrights have hiring approval; removing a director mid-rehearsal puts an entire production in doubt; losing a celebrity from the cast hurts ticket sales. All of these roles continue to be held predominantly by men and their victims are predominantly women. An unresolved conflict with a person in power can easily become an ongoing barrier to career opportunities throughout a woman’s career. Harassment and abuse are contributing factors that slow the advancement of women in theater.

We are aware of men being intentionally injured during performances, as well as gay and straight men being harassed and abused in much the same way as women have been. Victims can be anyone, stagehands as well as actresses, designers as well as writers. A more robust and victim-centered response to the problem will move the culture forward and benefit all.

On January 12th at New Dramatists, a meeting was held among members of the theater community, including representatives from the Dramatists Guild of America, the Actor’s Equity Association, and the Stage Directors and Choreographers Society. Three proposals for change and enhancement of their existing procedures were generated and discussed:

We recommend that a clear statement be read at each professional production’s first company meeting outlining the procedure to file a complaint. The procedures and related contact numbers should be prominently posted on theater and union/guild websites.

We recommend that each union or guild designate a specific person to receive complaints. This person should be thoroughly educated and knowledgeable about the procedures and be prepared to guide victims to them and to appropriate support services.

We recommend that, when appropriate, a mediation process be overseen by a neutral professional be added to what the unions and guilds currently offer to parties in dispute over a claim of abuse or harassment.

Mediation has an overwhelming success rate. Over the past twenty years, it has become a broadly endorsed method for handling harassment claims in the courts and in private practice. All federal district courts are required by law to devise and implement programs to promote and encourage alternative dispute resolution. The New York Supreme Court has both mandatory and voluntary mediation programs, depending on the nature of the dispute. A study of the U.S. Equal Employment Opportunity Commission’s (EEOC) mediation program found that 91% of claimants and 96% of respondents who used mediation to solve their dispute would use it again. It is commonly held that when disputing parties voluntarily participate in mediation they are more likely to abide by the terms of their agreement and there is less likely to be retribution, one of the most common reasons victims do not come forward with complaints. Moreover, mediation provides a complainant the opportunity to speak for herself and empowers her to participate in shaping a remedy. It also allows the accused to clarify his side of the story and avoid public charges. In addition, mediation is the most likely method to reach an amicable resolution in a relatively short time, which limits costs and disruption to the production, theater, union or guild.

We strongly recommend and support making these simple changes to recognize and address the needs of the victims of abuse. By instituting these measures, the unions and guilds will be taking steps toward ensuring the safety and dignity of their members.

The theater community has long whispered, laughed, and written about harassment in its ranks, telling tales of the casting couch and out-of-control stars. It is past time we stopped ignoring or even encouraging abusive behavior and publicly recognize the existence of sexual discrimination, harassment, and gender-based violence within our community. It is time to confront and overcome this abuse.”