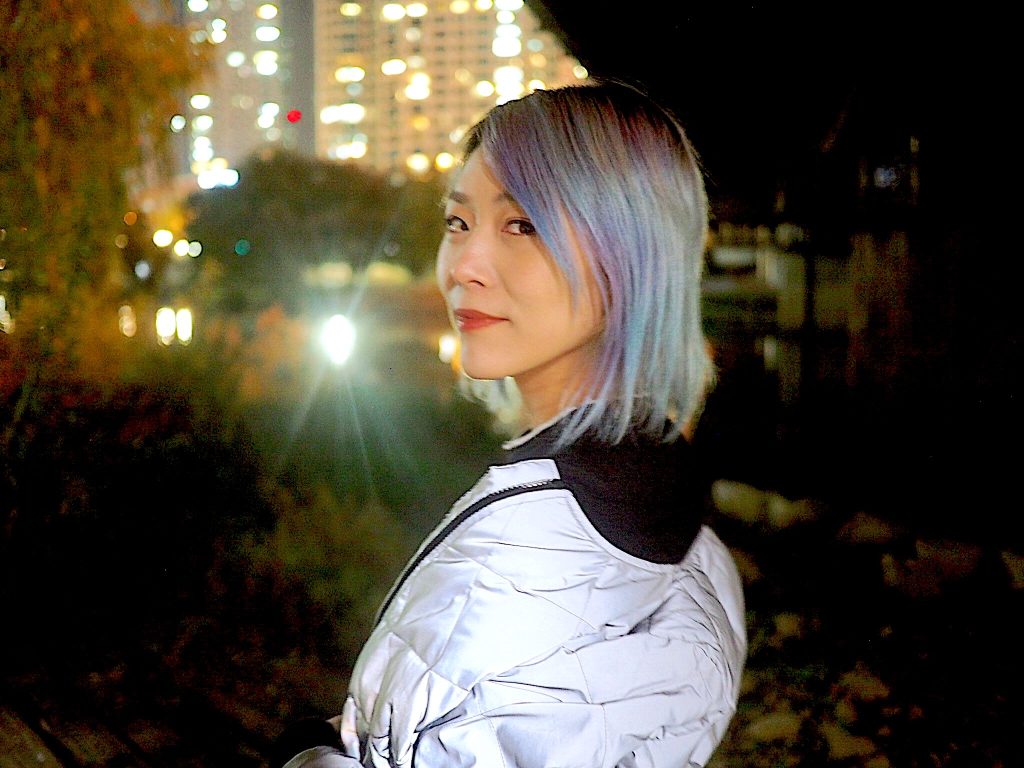 If Helen Park could name two pivotal sources of inspiration, it would be these: K-pop and Once Upon a Mattress.

Helen was born in Busan, South Korea, but when she was in second grade, her parents moved to Missouri. There, she was cast in a summer school production of Once Upon a Mattress. Park played The Minstrel and had a blast. “I memorized the whole score. And I pretended to be every single character in that show,” she recalls. “I fell in love with musical theater then.”

Living abroad, away from her hometown, Helen would also listen to a lot of Korean pop music: “K-pop was home to me.” So much so that for a short time, Park thought she would be a songwriter in South Korea’s billion-dollar music industry. But her parents wanted Park to get a degree, so she enrolled in New York University’s Graduate Musical Theatre Writing Program.

Now, Park is combining her two loves as the co-writer of the music and lyrics for “KPOP,” which is coming to Broadway at Circle in the Square Oct. 13, 2022 (with an opening night set for Nov. 20).

“KPOP” is a look at the K-pop industry and is billed as a group of pop superstars coming together for a special one-night-only concert. The musical also stars real-life K-pop stars, such as Luna (formerly of girl group f(x)), Bo Hyung Kim (formerly of SPICA and half of the duo KEEMBO), Min Young Lee (formerly of miss A), and Kevin Woo (formerly of U-KISS).

“KPOP” originally debuted Off-Broadway in 2017, produced by Ars Nova in association with Ma-Yi Theater and Woodshed Collective. It quickly sold out and extended, with praise being given to Park and Max Vernon’s score, called “perversely addictive” by the New York Times. The musical received a Richard Rodgers Award and three Lucille Lortel Awards (including Best Musical).

“KPOP” marks Park’s Broadway debut, making her only the sixth Asian composer to write a Broadway show and the first Asian-American female composer on Broadway. That last factoid astounds Park, “I’m hoping that more young more Asian composers can actually believe that they can be on Broadway and push for it,” she says.

Aside from “KPOP,” Park also co-wrote the songs for Over the Moon, the animated Netflix film starring Hamilton’s Phillipa Soo.

Below, Park talks about how “KPOP” has changed since 2017 (Park and Vernon have written around “seven or eight” new songs for the Broadway transfer), how she taught herself to be a pop music producer, and how she crafts a good hook.

The following answers are direct excerpts from our conversation.

What is “KPOP” about now? The Off-Broadway version was an immersive experience with a bunch of different intersecting storylines, but now that it’s in a proscenium, I heard it focuses more on MwE, the diva character?

It’s really about finding your voice. When you’re in the machine of K-pop, it’s sometimes confusing, what you are and what you do, the boundaries — it’s sometimes hard to find yourself and find what you want. [Now], this show is more about that journey rather than [in the 2017 version] crossing over from Korea to America. And it really centers on MwE more than at Ars Nova. I don’t think I can say more than that, because it’s all still evolving.

I feel like in musical theater, composing in a pop idiom instead of a traditional musical theater sound is still discouraged. What do you love about pop music?

The reason why I love music, and why I want to do music as a career, is because I find that it has healing powers. I find that it brings people together. I find that it has a purpose beyond just entertainment. As much as I have respect for very avant-garde or experimental music or other types of music, I love pop music because I think people can enjoy the music in so many different ways — in different circumstances and different situations. It has this appealing and comforting power, it has room for people to chime in with their own experience. It’s approachable for so many people.

And with K-pop in particular, even if you don’t understand the words because they’re in another language, you still want to sing them.

Yeah, it’s so crazy to me that something like K-pop is so universal. It was really crazy to me in 2017, because so many of the songs from our show, half of the lyrics are in Korean. But so many people feel the emotions that were coming from the melody, the harmony, and the situation in the story. And it was moving to people, even when they didn’t quite understand the lyrics 100 percent. That was the power of the music, it really transcends language.

Why did you settle on musical theatre instead of continuing to pursue the pop music industry?

What I love about musical theatre is that I have so many options, there’s no rules. In terms of genres, I can mash two genres together — whatever is the best to tell a new story. There’s this freedom.

I find that in pop music, there’s a narrow spectrum; you need to adhere to one genre. Like if you’re a pop music musician, you have this one brand, and you have to stick with only that type of music. Whereas because I had such different experiences growing up and I’ve lived in so many different environments and places, I have so many different influences that I like to use in my music: American pop, K-pop, gospel music, jazz. I love that about musical theater. I’m free of the trends, and I’m free of these boxes that people like to put pop music in.

And I just love writing songs and music to tell stories. I love the context that the stories provide, and really diving into the sound of the character, the sound of the emotions that the character goes through. I think that you can’t have that in pop music, pop music is all about vibes. And it’s not necessarily about the journey from A to B, which I think musical theater songs are about.

Your songs for “KPOP” were so catchy that I still have your demos on my phone. Writing a song that sticks in the audience’s head is not easy. So what’s your technique for crafting a good hook?

Yeah, it’s difficult. So what I do is I try, like, 100 different hooks for a song. It really depends. Sometimes I start with the hook and I don’t have a beat. But sometimes I build the beat first, and then I would stay on top of it until it’s just right. And then when I have something that I’m happy with, I leave it. Then I come back to it, like the next day when I have a fresh head, fresh brain. I hear it again with my editor hat on and then change whatever I don’t think is working. And then I leave it, come back again the next day.

I don’t think in terms of making a catchy song. I’m not that kind of person who is like, ‘Oh, I wrote this in an hour and that’s the song.’ I wish I’m like that but I’m not. It takes many revisits and editing until it’s where I’m happy. And then the next day I come back and listen to it and then if I’m still happy, then I know it’s a good song.

You’re also in charge of music production in “KPOP.” Not many composers also orchestrate their own songs. How did you learn about pop music production, since I assume that’s not something they teach at a musical theater program?

That’s something that I trained myself in prior to coming to New York to do the grad school program. When I was in Korea and when I tried to make it as a K-pop songwriter, I watched so many YouTube videos. I was just self-taught, because no one would pay for my music production lessons. So I was studying online, there’s so many resources online. But when I listen back to those days, the tracks that I made during those days, it was very amateur. It’s not as good as it is now. But that definitely kicked off my music-producing journey.

And then when I got on board to do “KPOP” the musical for Ars Nova — I started working on it in 2014 —  I quickly realized how important it is to produce music. It could very easily become a parody if I just took an impression of a song. Back then, there were a lot of stereotypes for K-pop music. Like girl-group music is cutesy so, okay, bell sounds? Like, something that’s cute and sparkly? Is that really girl group music? Some people seem to think that, but I found it very offensive. That is not an accurate representation of a very beloved genre.

I really took that as my priority to really spruce up the music production. And so I did a lot more research once I got on board to do “KPOP.” No one really told me to do that. But I was like, there hasn’t been a show like this on or off-Broadway, there hasn’t been K-pop represented in this space. And I really felt like I needed to do [the music production], even if it’s not perfect. I knew that I had to not make fun of my own culture. So I really dug deep with music producing from 2014.

You’re going to be the first Asian-American female composer to have a show on Broadway. Why do you think it’s so rare for Asian-American composers to breakthrough?

It’s the same as any other department. Even [in] our design department in our show, I find that so many of the people of color in our team, most of them are way less experienced than their white counterparts. I think the reason is people have been finding comfort in hiring who they know. And obviously, who they know is very limited. I think it’s been the same cycle over and over again. So if someone has a skill and doesn’t have experience, they’re not trusted to take on a Broadway show, but then that experience will only be had if someone took a leap of faith in their skill. There hasn’t been the opportunity.

It also has been hard for Asians, and female composers, to even attempt or dream of writing for Broadway because it’s such a guys’ club. Even when you look at non-Asians and just in the composer pool, women are very few compared to the number of white male composers on this level. I’m hoping that there will be more opportunities. I’m hoping that more young Asian composers can actually believe that they can be on Broadway and push for it.

I think that people are slowly opening up to the idea that there can be more diversity in the composer world. There’s so many different perspectives that are needed. I think [Asian-American composers] should really go for it and I think the door will open when you’re prepared.