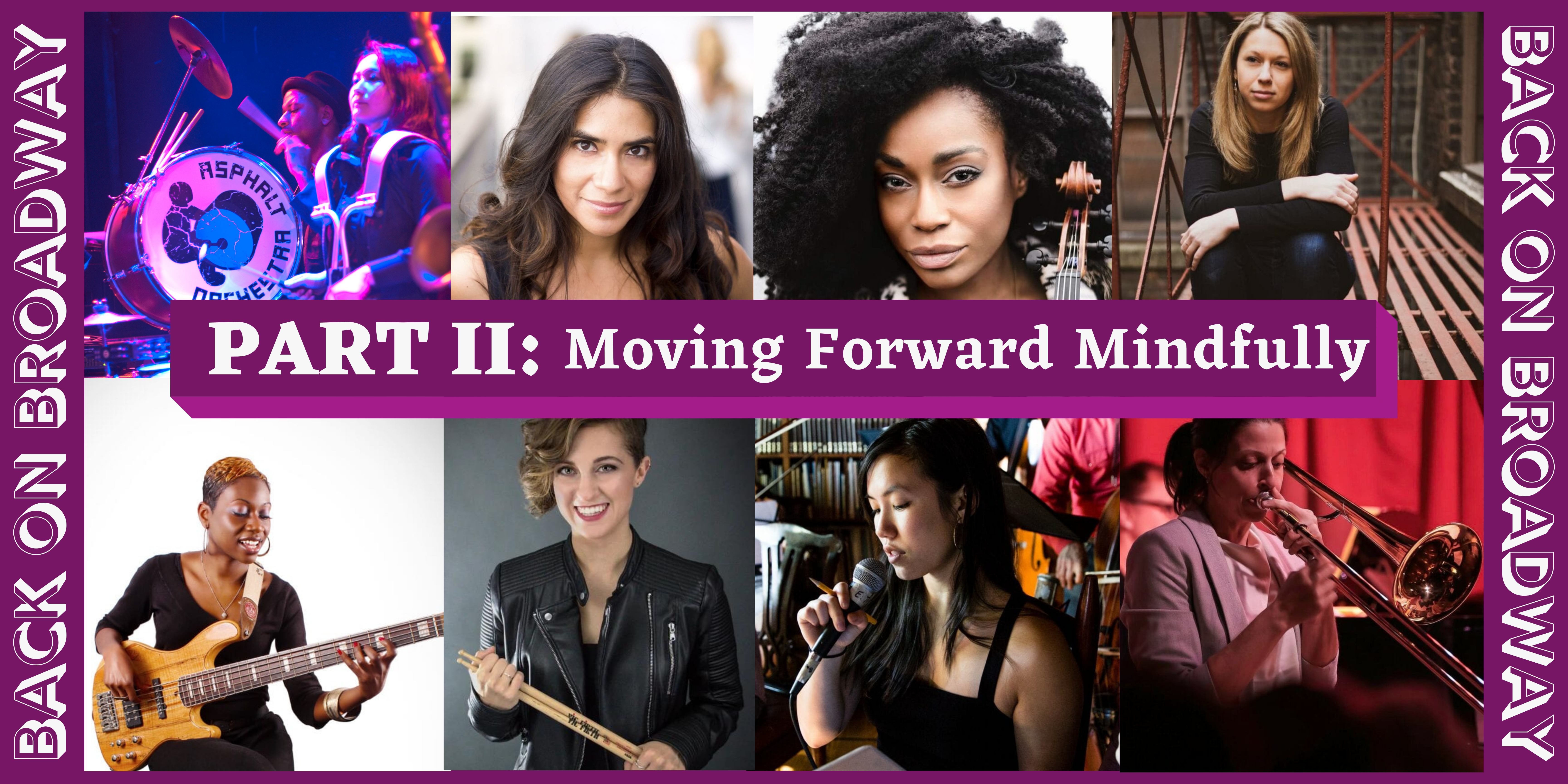 Last week, in a feature about Maestras Back on Broadway, I explored what it was like for eight musicians to return to the Broadway stage (or pit) after so many months away, with the world still experiencing the effects of the COVID-19 pandemic. Many of the women said that everything in their theater was just as they’d left it back in March of 2020. Returning to their tracks in their respective shows felt like riding a bike.

But Broadway is not the same as it was before the pandemic. Nor should it be. After all, the entire world has changed drastically in the two years since COVID-19 came onto the scene. The theatrical landscape has had to adjust as well.

From re-evaluating its safety procedures and policies in order to accommodate new pandemic protocols to reexamining its treatment of historically excluded communities who have been marginalized or underrepresented in the industry for far too long, Broadway has been making efforts to create a more sustainable, equitable environment for its theatrical artists.

For this second part of the article, I reached back out to several musicians whom I’d spoken to this past fall to discuss their shows’ evolving COVID-19 and DEIA initiatives.

Broadway may have reopened but the pandemic is still ongoing. While the specifics of the safety measures vary slightly from show to show, each  show has implemented masks, vaccinations, and testing policies. As the Omicron variant has taken hold, these policies and their enforcement have become even more rigorous.

Even before Omicron, Broadway shows required masks backstage, in pits, and in dressing rooms. Most musicians can easily perform their tracks while masked. However, as Tina’s trombone player, it’s a little trickier for Sara Jacovino.

“We do wear masks in between playing, obviously,” she said. Jacovino explained how the Tina woodwind section takes off their masks to play their parts and that the entire band used to remove their masks at the end of the show. However, thanks to Omicron, that is no longer the case. The mask policy at Tina has become more rigorous in other ways too: “The only types of face coverings that are acceptable are high-end medical masks: N95, KN95 and KF94.”

A post shared by TINA The Musical London (@tinathemusical)

Back in the fall, shows had already been mindful of increasing ventilation backstage and in the pit. Now, the company of Six has air purifiers all over the theatre, especially in backstage areas and in the dressing rooms. On the bright side, because the Six musicians have always played the show onstage, they don’t have to deal with being in a confined space, and the procedures that have to be upheld in enclosed orchestra pits.

Some musicals, like Tina, have relatively large pits with opportunities to social distance. But the Company pit in the Bernard Jacobs Theater is very small. “We can’t really social distance because that pit is TINY,” explained Company keyboardist Cynthia Meng. That’s why she is encouraged by everyone’s efforts to ensure their health and safety on-site.

When Company resumed performances, back in November 2021, the band was doing daily antigen tests. Now, according to Meng, they’ve “upped the testing rigidity significantly since the Omicron spikes.” As a result, they’ve been catching COVID-19 cases early and managing to prevent the spread among the band’s small space.“I’ve heard that it’s one of the most rigid testing protocols around,” Meng added.

Originally, the Tina band took PCR tests three times a week, but now they take daily PCR tests. Any musicians who have to take their masks off to play their track take rapid PCR tests before each show.

In October, Jacovino had told me that the show was being very proactive with their safety measures. Thanks to this rigor, they’d managed to avoid any Covid cases in the band for most of the fall until the Omicron variant came along.  “It was difficult to see so many people test positive for Covid,” Jacovino said. “It was also difficult to watch it hit every show across our industry.”

Two musicals that were previously featured in this series, Diana and Jagged Little Pill, are among the shows that have had to end their runs unexpectedly. The other musicals included in this article all had to cancel some of their December 2021 performances or postpone their runs.

“It makes me sad to hear that some shows are closing and see that Covid continues to hit our industry hard,” said Six percussionist Marianna Ramirez. “I feel for my friends and colleagues.”

“Honestly after seeing all of the show cancellations in the Broadway community over these last few weeks, it felt inevitable that some of our shows would be canceled at some point as well,” said Elena Bonomo, who plays drums for Six. “I’m just glad that everyone was able to receive the time that they needed to rest and heal up in order to be ready for shows again! Our first show back on January 2nd was extra special – it reminded me of opening night all over again.”

After Tina experienced a slew of COVID-related show cancellations, Jacovino described the show’s second reopening as “an amazing group effort – especially by the swings and subs in ALL departments to get us rolling again.”

Upon reopening, many shows increased the number of subs who would be prepared to play at a moment’s notice in the event of a company member testing positive: a prescient decision.

“It’s been truly the era of the substitute musician like never before,” Meng noted. “Our emergency and regular subs have been truly just the most incredible people – they’ve been jumping in left and right, sometimes at really short notice (not just at our show, but at so many others) and I have the utmost respect for them.”

A post shared by TINA The Musical London (@tinathemusical)

Understudies and swings are not the only underappreciated company members who are now getting their due.

Throughout the pandemic, the industry has been having long overdue conversations about diversity, equity, inclusion, and accessibility (DEIA). Consequently, musicians returned to companies now more aware of the impact and implications of these issues on both the theatre community and society at large.

“When we first heard about the reopening back in May, the producer kept talking about how to make a change,” Yamashita said. “It was all about real change.” The Tina producers, who continued to pay health insurance for their company members throughout the pandemic, have become more attuned to the physical and mental health needs of their cast, crew, and musicians.

When George Floyd’s murder shook the nation and unleashed a long-simmering cry for social justice, the Tina cast, musicians, and crew got together for a series of Zooms that Jacovino found to be “eye-opening” and Yamashita described as “a wake-up call.”

“We have a very diverse group of people, probably more so than most Broadway orchestras,” Jacovino pointed out. “I think people that work at Tina were probably more disproportionately affected by that entire, terrible turn of events that people were finally starting to become aware of. People that work at our show have been dealing with these issues for their entire lives.”

Subsequently, those Zoom calls motivated the Tina band to create a book group committed to reading and discussing books that address racism and working to come up with their own anti-racism initiatives.

During the pandemic, the Company band also experienced eye-opening Zooms that led to greater understanding between the musicians and a desire to create impactful change. The calls began as an opportunity to celebrate what would’ve been their original opening night, but the band continued to gather virtually every Sunday (for 86 weeks) until they resumed rehearsals in  November 2021. Over time, these Zooms developed into an opportunity for deep discussion about complicated issues, such as representation in pits.

According to Meng, the conversations led to “mutual respect and understanding” within the Company band and a desire to make their pit more inclusive. “Maybe that means hiring some more subs who are coming from diverse backgrounds,” she suggested. “Maybe that means having people just come observe in the pit who haven’t had the chance before.” That said, she was quick to point out the importance of ensuring that when those who have been historically excluded join the pit, they are made to feel welcome and not tokenized.

On the first day back at Six, the entire company began a new tradition of gratitude circles with the intention of creating a more welcoming environment for everyone who works on the show. The cast, crew, and musicians would sit in a circle to share what they were grateful for and how they were feeling. Bass player Michelle Osbourne appreciates the shift in attitude that the gratitude circles represented, explaining that it was “quite significant to me, as a Black woman and as a Brit.”

“I could clearly see steps being taken and things being put in place that include everyone, and, at least, get the ball rolling,” she said. “When there’s action, you can have more confidence in what people say.”

“Everyone is making space now to listen to each other,” said Bonomo. “We actually were taking the time to take everybody’s feelings into consideration. We’re more aware of what people have gone through over the past year. It seems people are more down to listen and support each other.”

As significant and necessary as conversations can be, it’s gratifying to know that this talk has led to the establishment of new, meaningful initiatives. Musicians within the Maestra community have participated in the formation of new and inclusive arts organizations, with missions rooted in social justice and equity; examples include MUSE and The Broadway Sinfonietta. But Broadway shows are taking action in this regard as well.

Before they closed, the Diana company, including associate musical director Haley Bennett, participated in Diversity, Equity, and Inclusion training as well as a “Conscious Comeback” program, while exploring educational and outreach opportunities to expand their community.

“I think in the music community, there is a big focus on hiring the best player for the job,” Meng said. “But we all know that it’s much more complicated than just hiring the best player, whatever that term means. We also should recognize that sometimes it’s hard to even get a pool of people in the room to audition to be the ‘best player.’”

It remains to be seen whether these DEIA initiatives will last beyond the current theater season, or whether the industry’s newfound awareness of the importance of prioritizing peoples’ wellbeing (whether physically, mentally, or emotionally) will fade away as more and more shows struggle to stay afloat.

Nevertheless, there is reason to hope that Broadway is turning over a new leaf – at least where musicians are concerned. As Meng observed, “things have been evolving and pits have really been changing over time, especially in recent history.”

Many of the participants in this piece made their Broadway debuts within the past few years after previously subbing on a multitude of shows. They are now working in pits that are more diverse than ever before with more women in positions of leadership, or even in all-female bands! The Broadway orchestra is not as it was.

It is quite likely that these womens’ valuable experiences during the pandemic theatre seasons will continue to inform how they move forward mindfully on their ensuing shows for years to come.