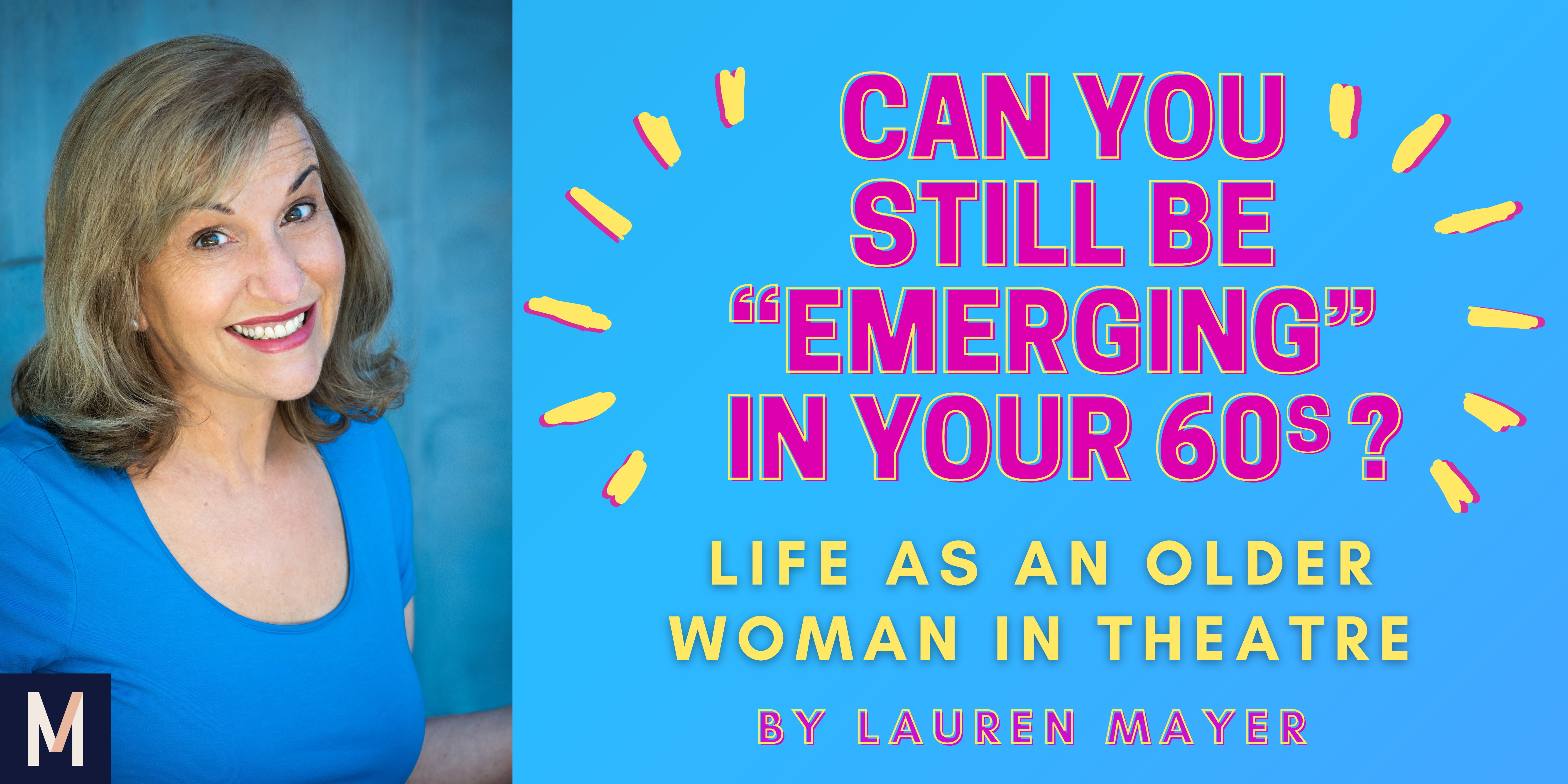 Like many Maestras, my career has lived in an amorphous middle ground. While I’ve never had a hit (or even a flop) Broadway musical, it’s far more than a hobby.

I’ve made a living in the arts for 42 years without ever having a “normal” job by cobbling together freelance work as a music director, arranger, and writer of special material for cabaret singers, custom commissions, and revues for corporate clients. Additionally, I collect royalties from recording my own comedy songs and support from fans on Patreon.

I’m sure many of you can relate to my position: grateful for the work I have but always aspiring to bigger projects (higher quality, more visible, and, let’s be honest, more lucrative would be nice too). Unfortunately, most opportunities in the arts seem to come with the unspoken caveat that anyone who hasn’t “made it big” by an early age either gives up or doesn’t have much to offer.

The grants and awards for emerging writers assume “emerging” is synonymous with “young”. This leads to an exclusion of those of us who are on the older side. Sometimes this is implicit in ways we observe as trends, such as all past recipients being younger than our children, and sometimes it’s explicit, such as a specified age cutoff.

But what about those of us with grandchildren or graying hair who are still “sticking it out”, working in theater but still looking for additional exposure or opportunities?

“The Age Issue” in the Industry

Awareness of the need for more diversity in theater has been transformational over the past couple of years. We truly need to open the door for creatives who represent diverse ethnic, racial, and gender identities. However, amidst this awakening, age discrimination seems to be overlooked.

In casting, hiring, and other creative opportunities, ageism still seems acceptable. I mean, when’s the last time you saw an article about ”60 new composers over 60” or an award program for undiscovered late-bloomers? For some reason, we’re supposed to believe a 25-year-old with limited life experience can accurately represent a 50-year-old with a few drawn-on wrinkles, but a 50-year-old who actually remembers being 25 can’t pull off playing that age onstage.

In our generally youth-obsessed culture, older women are especially marginalized across the board. For example, it’s so unusual for a woman to have a younger male partner that we have a special name for her: “cougar”. The word for a man with a younger female partner? Normal.

Love stories in both film and stage are still much more likely to feature an older man with a much younger woman. It’s disappointing to see that even though inclusivity in our industry is at an all-time high in almost every other way, it hasn’t addressed the age issue yet.

You’re still much more likely to see a 30-year-old play the mother of a college student in Next to Normal than to see a 50-year-old play a character like Margo Channing, portrayed by Bette Davis in All About Eve (1950), who is supposed to be in her early 40s.

I’m so used to feeling invisible that I was dumbfounded recently at the grocery store when my basket included a bottle of wine and the cashier asked to see some ID. When I told him he’d made my day, he replied, “Actually we’ve been told to card anyone who looks under 100.” (But on the bright side, I guess he was trying to tell me I look pretty good for 99.)

Finding Power in my Perspective

My experience as an older woman in theater hasn’t been all frustration.

One of the fringe benefits of being a writer is that you have a creative outlet for venting, so I created a one-woman show called “I’m Not Old, I’m Vintage” featuring original songs, comic anecdotes, and research.

I intentionally included quotes from inspiring older women including that eminent philosopher, Marion Ross – also known for playing Marion Cunningham on Happy Days – who said she’s always puzzled when friends tell her they’ve made their peace with aging. As Ross put it, “How can you make peace with something you were never fighting?”

Writing “The Most Unlikely Star”

Two years ago I found another terrific role model when I began collaborating with another Bay Area-local playwright, Diane Sampson. Just like me, she’s an older woman who has been working in theater her entire life, has had some modest success (with several plays produced but no big national exposure), who is still writing and creating well past traditional retirement age.

The two of us hit it off immediately – on Zoom to begin with, of course – and occupied our downtime during lockdown writing our original musical The Most Unlikely Star, which we are currently pitching to theatres, about the stage and screen star Marie Dressler.

We picked her as a subject because we found her story fascinating, from her huge career ups and downs (from enormous success to obscurity and near-poverty and back) to her unconventional life (loving both men and women) to her involvement in historic events (like co-founding Chorus Equity Association and raising more money for World War I bonds than any other celebrity).

As we began researching her, we learned that she also achieved her greatest success late in her life: winning the Academy Award for “Actress in a Leading Role” in 1932, and being definitively declared the top box office draw by the Motion Picture Herald two years in a row. In fact, she is still the only actor of any gender to achieve the latter over the age of 60 to date.

Dressler yearned to be a dramatic actress all her life, despite being pigeonholed as a slapstick comedienne because she was a tall woman who didn’t conform to conventional beauty standards. Her persistence finally paid off!

We find her persistence endlessly inspiring and hope bringing her story to life will also inspire other older women who haven’t given up on their creative aspirations. You can listen to our songs “The Ones We Left Behind”, where Dressler entertains wounded soldiers, and “Heaven With You”, showcasing the relationship between Dressler and her lover Claire DuBrey.

Age in the Maestra Community

One of the numerous reasons I’m so grateful to have discovered the Maestra community is that here, I don’t feel invisible. Maestras come from a wide variety of demographics and the atmosphere of mutual support is truly inclusive. So, I’m hopeful that as we continue to push for more representation and more work for female-identifying and nonbinary musicians and creators, some of that will rub off on us AARP members.

I love learning from younger artists, who have introduced me to crowd-funding, effective social media use, and even the joys of TikTok. Reciprocally, I hope they can learn from our vast experience: not just my tales of “what it was like in the good old days when you recorded on actual ‘tape’ that had to be cut with a razor blade” (although I think that’s pretty interesting!), but how we’ve balanced artistic careers with child-rearing, navigating the scourge of “mansplainers” (still a problem), or strategies to combat writers’ block.

All that is to say, I feel so welcome within Maestra. The fact that Honor Roll Playwrights, an organization for women writers over 40, was the topic of Maestra’s November monthly meeting demonstrates the community’s devoted effort to learning from female-identifying creatives my age and even older. If you are a part of this demographic, I urge you to check it out and get involved!

No matter how you identify, we can all learn from women like Dressler who either started or kept pursuing creative and challenging endeavors later in life. A simple Google search will easily turn up hundreds of examples (unlike “the good old days” of going to the library and pouring through encyclopedias and card catalogs! So much for fond reminiscences…).

Here are a few of my favorite search results:

All of these women, lesser-known late-bloomers, and other creatives who are no longer with us demonstrate that aging shouldn’t slow us down creatively or marginalize us.

Of course, many women my age are already retired, including a lot of my friends, and there’s nothing wrong with that.

I’ve been very fortunate to create my own schedule for my entire career and I love what I do. Even if I could afford to quit working, I wouldn’t want to since it’s both my livelihood and my passion – something other people look forward to doing after they leave the workforce. (Which makes me wonder what golfers do when they retire: perhaps they take up accounting?)

Sure, there are a few jobs in theater where my age might be a legitimate hindrance – my no-longer young knees and shoulders are making me think twice before accepting too many gigs that require schlepping a keyboard around – but it seems obvious that writers, in general, get better with age. We have more experience, we have more to say, and (at least in my case) I have more time in which to say it now that I’m not raising children. We also have more of a sense of our own values and more trust in our own voice.

In the book “Women Rowing North”, sociologist Mary Pipher concludes that the happiest of all demographic groups was women over 70. Not because they were necessarily wealthy or free from challenges – in fact many of them were confronting health issues and financial concerns – but for the first time in their lives, they were free from taking care of families, and more importantly, free from worrying about how they looked, whom they attracted, or what people thought of them.

As one subject said, “I have everything I want – but that’s because I finally know WHAT to want.”

Additionally, The Washington Post tackled the question “Does creativity have an expiration date?” and found that while some of the ways the brain deteriorates with age can cause a decline of skills like multitasking and rapid calculations, other age-related changes enhance creativity! It also cites ageism as the biggest obstacle to older people continuing artistic pursuits.

I want to see the theatre world embrace the value and wisdom of older women, just like the Maestra community is modeling. Sure, providing opportunities for young, talented creatives is important, but we can also use a few grants and awards for projects by us “vintage” folks who have stuck it out all this time and remain underseen and underserved. In fact, the “Marie Dressler Persistence Award” for women over 60 would be a great idea!

Check out a few of my favorite career highlights on this YouTube playlist, including highlights from our workshop of “The Most Unlikely Star” and videos from my upcoming album “Don’t Mind Me (I’ll Just Sit Here in the Dark)”. I am kvelling (Yiddish for happy and proud) to let you know about this impending release, set for December 1, as it reframes the old negative Jewish Mother stereotype into something positive-yet-still-funny through comedic songs.

2 thoughts on “Can You Still Be “Emerging” in your 60s?: Life as an Older Woman in Theatre”