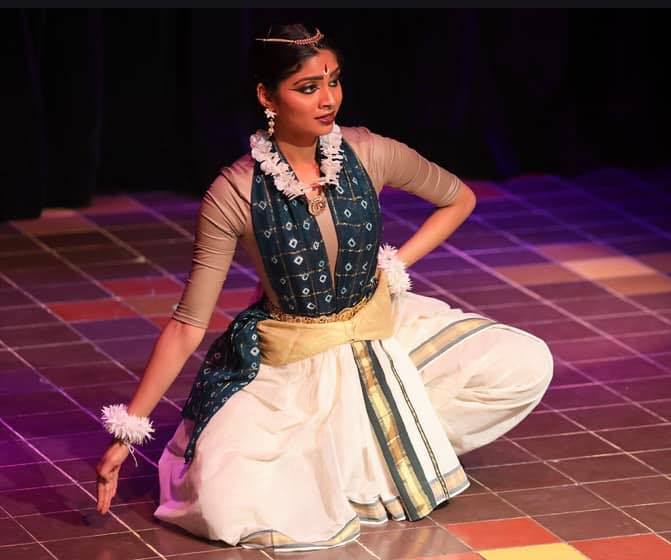 Cleveland, Ohio is known for many things: The Rock & Roll Hall of Fame, a decent sports team, a couple of Great Lakes. But for every young Indian kid in America involved in music and dance, Cleveland was an annual destination every March for the Cleveland Thyagaraja Aradhana. This festival was a celebration of the Carnatic (Indian classical music originating in South India) composer Saint Thyagaraja, and it featured the who’s who of Carnatic musicians and dancers from around the world coming to conduct workshops and judge competitions.

It was our Super Bowl — our moment in the spotlight where we could be completely authentic. But it was also the minefield that we, the young girls who grew into young women during our time at this festival, had to navigate. My mother always told me and my sister to stay close to her and not talk to certain male artists. She would put her body between us and the men that would greet us both warmly and uncomfortably as children. We were instructed to stay in groups, not take elevators alone with certain male artists, and return to our hotel rooms before the sun went down. I heard stories from other people about an incident that we would clearly brand as harassment or assault if it happened today. But children don’t have that language yet. So we laughed it off, continuing to sing and dance and be together in our untarnished world. Until we couldn’t anymore.

As the Western media and entertainment industry were in the throes of the #MeToo Movement in 2018, it finally reached the shores of India and ignited what should have been a wildfire. Almost every section of the industry was suddenly under a microscope: film, television, news media, and the arts. On October 8th, 2018, journalist Sandhya Menon tweeted an anonymous account of an 18-year-old woman who had been assaulted by Vairamuthu, a renowned and respected lyricist in the Tamil music industry in Chennai, India.

From here, famous singer and studio artist Chinmayi Sripadha took the baton and used her Twitter account as a place where people from the music, dance, film, and theatre industries could send their anonymous stories and consent to them being posted. Sripadha also posted the names of alleged perpetrators and took on a great amount of personal risk, both career-threatening and life-threatening.

Within a matter of days, the lens of the movement turned from the entertainment industry as a whole to individualized artistic sectors in music, dance, and theatre communities across India. Perpetrators were named. Public statements were made.

The Internal Complaints Commision, a board of industry professionals (none of whom have any experience in addressing sexual harassment or assault), was formed as a response to allegations in Chennai, the epicenter of the arts and entertainment in Tamilnadu. Certain artists were “black-listed” and banned from performing at prestigious institutions and teaching workshops. However, within a year, the commission stated that there had not been a single complaint filed with them. As our community of Indian artists continues to have conversations and create initiatives and groups centered around caring for victims and calling out perpetrators, we are looking towards other arts spaces for resources, models, and help.

The Indian arts space is still incredibly informal, full of familiarity and trust. In my work as an Indian artist, I have never signed a contract. Not a single one. It is almost like we work completely on the honor system, which unfortunately aids in the continued perpetuation of dangerous workplace practices. This is one of the core problems that needs to be addressed in the Indian arts space, and it is not an easy one to tackle in a culture where people feel their integrity is being questioned when they are asked for a contract.

As an artist who straddles the worlds of Indian music/dance and American musical theatre, my experience has demonstrated the power of a contract as a simple step that can be taken to ensure safety and security for artists — especially young artists. I first turned to the Maestra resources page and technical workshops for help and guidance in 2020 while working with Carespaces: an organization centered around providing resources for survivors and establishing formalized work spaces in the Indian arts community.

Through Maestra, I learned more about the legal implications of contracts, boilerplate language, and Title IX language as they apply to theatrical spaces. While it is still a long way off, I am encouraged by the realization that our spaces need formalization and oversight to ensure that every person, regardless of age, race, gender, sexual orientation, or any other factor, feels safe and protected in their workspaces.

However, the Indian arts spaces are far older and more rooted in tradition than musical theatre is, though it is worth noting that both spaces and the individuals within them are fighting against traditions. The main issue that us Indian artists are fighting for is the same as what Maestra stands for: the right for female and female-identifying artists to work on an even playing field where they are seen and treated as equals. In Indian art spaces, most female artists are paid less, treated poorly, and continually placed in precarious positions – especially when they are young and unmarried. (Marriage is often seen as a badge of safety by many women.) However, these problems specifically apply to cisgender, heterosexual women in a world where trans women are largely not welcomed and people from the LGBTQ+ community are largely silenced.

In many ways, my journey navigating both the Indian arts space post-#MeToo and the musical theatre space have mirrored each other. Finding Maestra in 2019 was a blessing because it gifted  me language, agency, and community that I was sorely lacking. Since joining this thriving community, I’ve had the great privilege of (virtually) congregating in majority-female spaces where I learned alongside women, was taught by women, and am now teaching women and young girls how to stand up for themselves.

Teaching girls and young women that someone may try to hurt them or take advantage of them in a space where they are meant to be safe is a horrible lesson to impart at such a young age, but right now it is an essential and formative one. I thank Maestra for providing me with the tools and concrete language that are quickly becoming the industry standard to teach the next generations how to be their own biggest advocates.

I have not gone back to Cleveland since I was a child. My mother very quickly pulled us away from that world when it left an unsavory taste in her mouth. But when I looked at the lineup for the 2020 festival (which was cancelled due to the pandemic), I was heartbroken to see many alleged perpetrators invited back to participate in spaces alongside those they endanger most: children and young artists. I was devastated, but not surprised. Everyone, including people who occupy positions of power and privilege, must continue to toil against the traditions that harm us and the “way things have always been” to create more equitable work spaces where everyone is truly welcome and safe.

When artistic spaces are not safe, we are doing our entire community a disservice by shutting out potential talent, innovation, and change for the sake of comfort and tradition. I personally know many people who are no longer involved in Indian arts spaces due to their negative experiences within them and the gaslighting they endured while trying to heal. When you love something more than anything in the world, you must be able to criticize it for the sake of that love. I love and fiercely fight for Carnatic music and Indian art: it is an integral part of my identity that is situated at the center of my artistic practice. However, loving something and not participating in changing it is engaging in a cycle of abuse, and the artists of this generation have proven that they do not have an appetite for abuse.

Watch the video below to hear Vaibu perform Canartic music.