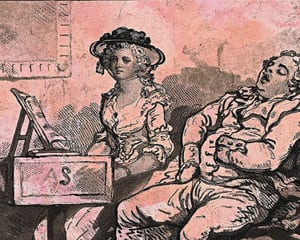 by Georgia Stitt
for Stage & Candor

About twenty years ago, the first composer to hire me for a professional job said to me, “I like the way you play the piano. You play like a man.”

At the time I was thrilled. Enormously flattered. I knew what he meant. He meant I was strong, that I attacked the keys with passion and energy, that I could be loud, that I had command of the instrument. I immediately drew a picture in my head of the kind of “girly” piano player he meant and I was glad I was not one of them. Those girls are afraid to dig in and play with their muscles. Their fingers lightly dust the keys. They play fluidly, yes, but gently, as if they are hoping you don’t really notice them.

One of the most visceral memories I have from growing up in the South is the sound of my mother’s voice correcting me. “Georgia, that’s not ladylike.” It might have referred to the way I was sitting or the way I was eating or something impolite I was saying about someone else. But “ladylike” meant “elegant,” “mannered,” and “appropriate.” It did not mean “ferocious.”

That composer who gave me my first job remains a friend of mine and he’s anything but sexist. The concept, however, that playing like a man is better than playing like a woman, has burned itself into my brain and I am only now starting to become aware of its implications. As the years have gone by, I’ve revisited his words a lot, and I have come to understand that that composer’s bias echoes my own. Clearly he didn’t create a bias in me, but he seems to have called it to the surface and forced me to name it.

Read the rest of the essay HERE.