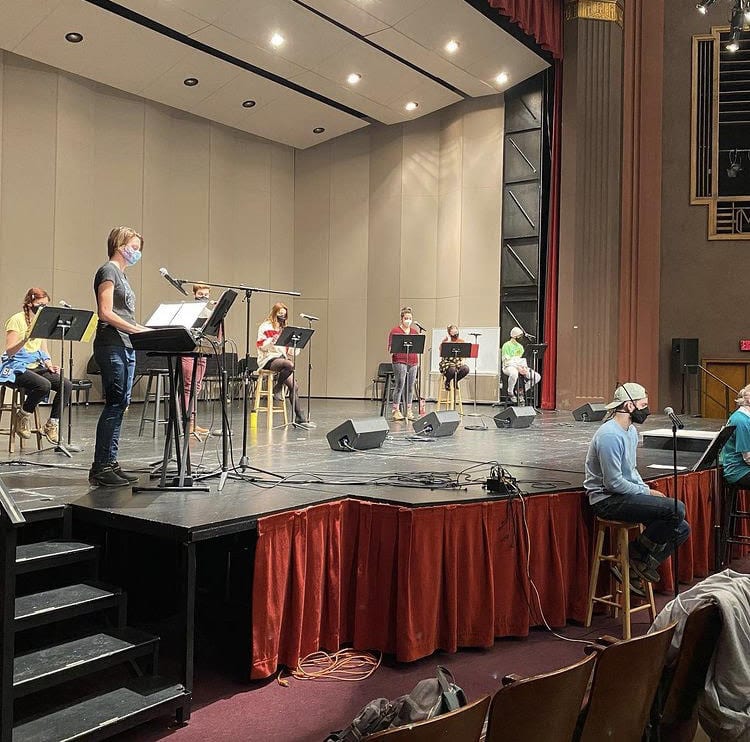 I moved to Missoula, Montana three years ago to get my MFA in Music Direction from the University of Montana. This particular degree track is new; I’m the first person to receive the degree. It has been an incredible experience to learn and grow as a music director, supplementing my undergraduate degree in music education with a deeper understanding of theatre, performance, and the specificities of being a theatre musician.

COVID shut our school down last March in the middle of a run of Spring Awakening; while we were originally bummed to miss our closing weekend, we quickly learned that we had been very lucky to get to perform at all. Our school, just like everybody else around the world, shifted to digital and hybrid formats. I music directed our fall production of The Theory of Relativity, recorded and performed virtually in Zoom format. It was a crash course in how to put together a digital show. Theory worked really well for a digital format; I was quite proud of the show and what we were able to accomplish. But for the spring semester, we wanted to do something different.

My colleague and friend Elli Caterisano and I were given the opportunity to write an original musical for our MFA Final Creative Project (thesis). After a whirlwind six-week writing intensive, we had Welcome to the Void, a musical about six people who all think they’re the last person on Earth. We wanted to write something that explored the isolation, confusion, and weirdness of the past year, but without referencing the pandemic directly.

The word “unprecedented” has been wildly overused in the past year, but it’s an accurate description of what we all went through. We’re starting to peek our heads our of our burrows and hopefully move towards a world where live theatre is once again possible, but we should not forget all that we learned during these times. Here are some things that I learned that I plan to take with me:

1. Collaborate With Your Circumstances

The “one person at a time” rule provided us our show’s concept; six people living in isolation. The “remote delivery” rule allowed us to use video effects to have two characters share a scene, and even have one actor cloned multiple times within the same scene, acting with herself. We kept the show short, knowing that attention spans are shorter while watching a streamed production. The timeline meant that we had to take our choices and run with them. We only had nine songs in order to facilitate an easier editing/mixing process. Our script and scenes changed  often, but the overall concept did not. This allowed the designers to do their work simultaneously with our revision process.

It was a fast and furious rehearsal process, and an even more furious filming process. We had nine evenings to film the entire show. We had one location for filming that had to be transformed, almost daily, into an entirely new room.

It felt like summerstock, except that we also had to be full-time students and teachers. The first time that the actors were able to perform with their masks off was also the first time they saw their set, and it was while the cameras were rolling. They all handled it with professionalism and poise, and it was beyond exciting to see the show come to life so quickly.

As a music director, my studies at UM bridged both music and theatre. I took courses in acting, directing, research, piano, conducting, jazz, voice, and more. I was loving the ability to grow as a well-rounded theatre artist, but none of my classes were technology-focused. Then the pandemic hit, and I had to teach myself how to become a sound engineer, mixer, recording artist, and all-around tech troubleshooter.

Logic was my main partner throughout this pandemic, and YouTube tutorials made for great teachers. I started with a middling understanding of GarageBand; now, I feel confident making click tracks, rehearsal tracks, and demos, along with sound mixing, editing, and orchestrating using Logic’s software. I orchestrated the majority of Welcome to the Void via Logic and I mixed the entire score myself. I now understand what “EQing” is, have learned a whole lot about digital balance and blend, and owe a debt of gratitude to FlexPitch.

It was fascinating to mix the singers in post-production; I know that the actors, all talented performers, would have naturally done much of this blending and fine-tuning themselves, had we been able to sing together. Instead, it became my job, and I became obsessed with how six different singers can have completely different waveforms as they pronounce the word “I.”

Technology continues to evolve and grow, and we have to grow with it. I finally downloaded TikTok, even though it makes me feel ancient at 28. It’s incredible what people can do on that app! The ways they are redefining performance! Instead of being intimidated by it, I’m trying to be excited. The more tricks we have up our sleeves, the more capable we will be of telling the stories that we want to tell.

3. Be Flexible and Be Kind

I think that one of the strengths of music directors is our flexibility; we wear many different hats depending on the show we work on, we constantly switch between a wide variety of musical and theatrical styles, and we constantly have to make changes on the fly. Applying this mindset to a year of remote and hybrid instruction allowed us to keep moving forward. We could only have four singers at a time in rehearsal, so we learned how to create rehearsal tracks and how to give the cast the tools they needed to work at home. We were masked, so I had to learn how to cue singers without a visible breath. The actors couldn’t physically interact, so we had to find ways to create connection from a distance. Some of it worked, and some of it didn’t. But by continuing to try new things, we tried to stay positive and keep finding new ways to be creative.

By writing our own show, we were able to embrace flexibility. Everything we wrote was with the mindset that, at any time, we might end up completely remote, or we might have to change the filming schedule, or somebody could end up quarantined, or the University policies might change. Having our own work let us keep all potential pitfalls in mind. We were lucky that our original plan mostly worked out, but having contingency plans was such a comfort.

Kindness is always key, but that became even more clear during this pandemic. As theatre artists, we can get so stuck in a “show must go on” mentality, but this pause has helped me remember that our health is so much more important than any show we are working on. I hope that, in the future, we continue to allow artists to advocate for their mental and physical well-being, instead of pushing them to perform through illness or injury. Theatre is on its way back, and I hope we as the next generation of theatre artists remember some of the lessons we learned from 2020- be flexible, be kind, take nothing for granted, and keep learning.