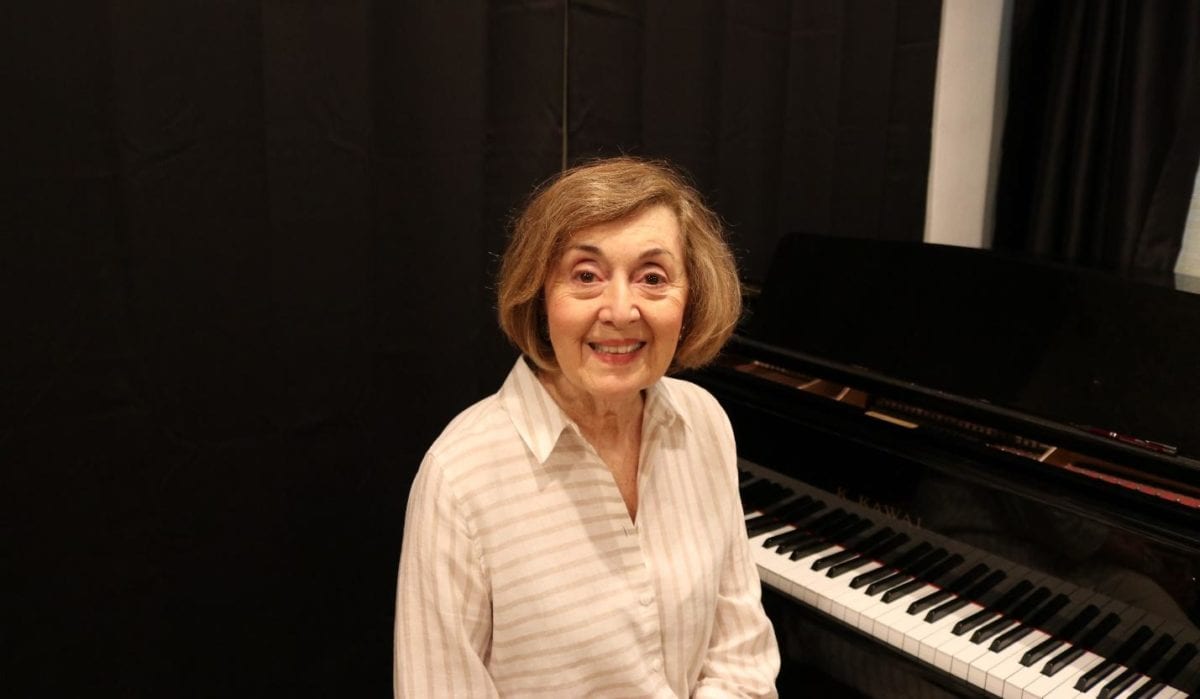 Nancy Ford is a composer whose works have been featured on Broadway, Off-Broadway, and in Regional Theaters. A critically-acclaimed artist, Nancy is the recipient of a Drama Desk Award for Most Promising Musical Writer for her work on the The Last Sweet Days of Isaac, which also garnered the Outer Critics Circle Award for Best Off-Broadway Musical and three Obie Awards, including the Obie for Best Musical. Nancy Ford and her writing partner Gretchen Cryer were among the very first commercially successful female composer/lyricist teams in musical theater history.

A Conversation with Nancy Ford

Jamie Maletz: You are internationally famous for having created the first hit feminist musical, I’m Getting My Act Together and Taking It on the Road (which premiered Off-Broadway in 1978). First of all, that’s awesome. Second of all, how does that feel?

JM: Do you think that happens a lot? That when women write about women just being people, it gets labeled as feminist?

Nancy Ford: Yes, definitely. When men write about men, it’s not labeled “masculinist.” No, somehow, shows about men are “universal.” But shows about women are “feminist.”

JM: I read about an event that you were part of in December 2017, “The Women Who Compose For Broadway;” you had some songs in it?

Nancy Ford: Oh, yeah. That was produced by Marjorie Hayes. They had a song from our Eleanor Roosevelt show in it.

JM: Wait. You have an Eleanor Roosevelt show?

Nancy Ford: We started writing it about thirty years ago and have yet to get it on in New York City. Oh–did you see The Prom?

JM: I was just going to say!

Nancy Ford: [Laughs] And our show is called Eleanor! So I wrote a note to one of the producers and sent her a CD and said “you probably don’t have an original cast album from your Eleanor, so, here’s– you might like to have ours.”

JM: Yes! Did they respond?

JM: I was also going to ask: in a CUNY interview with Linda Winer, you and your writing partner Gretchen Cryer were called the first successful female composer/lyricist team in musical theater history. And that’s so cool, because that’s historic. And whatever comes next, that can’t be changed or altered in the timeline of our industry. Have you ever worked with anyone other than Gretchen?

Nancy Ford: Yes, I have. I’ve worked with other women, and I’ve also worked with one man, Tom Jones, who wrote The Fantasticks. And, um, I guess I don’t find a whole lot of difference. The important thing is to have similar sensibilities, whether it’s a woman or a man. It makes the collaboration a lot easier. I know people for a long time thought, probably, that two women couldn’t work together–-that there would be cat fights or something. But that’s a very stereotypical idea. Gretchen and I, though, honestly…we have said to each other very honestly that we might have gotten farther had we each had a male collaborator.

JM: In addition to each other?

Nancy Ford: Yeah. If we had collaborators who were men, other than just two women. And, of course, it especially doesn’t help being older women. A lot of people probably think they don’t want to work with their mothers or grandmothers. And–maybe that’s a cop-out. Maybe they just don’t like the work. That’s always a possibility. I think we tend to want to look for reasons other than the work not being good enough. We think, “It isn’t that they don’t like the work, it must be some other reason.” And, I don’t know, that’s probably not always true. Sometimes it is, sometimes it isn’t.

JM: So what was it like for you starting out in this industry? What has your career path been like?

Nancy Ford: We were very fortunate in the early years of our career that we did get things on. The very first show that we got on was thanks to Gretchen’s then-husband David Cryer and his partner Albert Poland who were starting to produce things. And they raised the money– with our help, because we did countless backer auditions– for our very first show, which was capitalized at $40,000.

JM: How the times have changed.

Nancy Ford: [Laughs] Yeah. It had twelve characters and three musicians. It was at what’s now the Lortel Theatre– it was called the Theatre de Lys back then. So, see, I mean, things have changed, but I mean, it was men who gave us our start. I give them full credit for that.

JM: Male allies are important. Definitely the whole point is equality, not replacement.

Nancy Ford: For both Gretchen and I, we didn’t start out writing. We started out in other aspects of theater, which helped to get our feet in the door. Gretchen was in choruses of Broadway shows, and I… again, a man called me, and said “if you can get down to the Theatre de Lys this afternoon at 2:30, you can audition to be Lotte Lenya’s accompanist in Brecht on Brecht. And I rushed right down there and got the job, and got to know people in that area, and got to know people in The Fantasticks… when I was playing piano for The Fantasticks, that’s how I got to know Tom Jones and Harvey Schmidt, and Gretchen at the same time was in one of their shows on Broadway, in the chorus of 110 in the Shade. So Tom and Harvey were mentors to us. So those men helped us, Tom and Harvey. They took us to their music publisher, and they helped us hone our backers’ auditions, and they were really great friends, and we’ve stayed friends over the years. And… that was over quite a long period of time. It wasn’t that we just arrived in New York and– boom. And I remember with our first show, before David and Albert decided to produce it, we had lots of appointments with people that had been set up by people we knew from these different shows we had been associated with. And I wrote down everything they said. And there were a lot of people saying a lot of great things about our work. But they didn’t say “we’ll produce your show” or “we want to publish your score.” So it wasn’t easy.

JM: So what would you say is the secret to your success?

Nancy Ford: Well, you just keep having the meetings. And somebody finally– or, I don’t know- as I say, in our case, ultimately, it was sort of a self-produced thing. I mean, it was Gretchen’s husband and his business partner, and having all those backers’ auditions. We had lots of investors putting in small amounts of money. I don’t think you can do that nowadays– that’s the trouble. But I never wanted to work on anything that I didn’t find interesting to me. And Gretchen liked to do original things, and she has a very quirky, interesting mind, so the things that we did were always kind of curious and interesting to me.

JM: Now to bring things back to where this interview is being featured: Why did you join Maestra?

Nancy Ford: Oh! I just, well, I was so impressed with Georgia Stitt.

Nancy Ford: She interviewed us for The Dramatists Guild Legacy Project. I’m amazed at how she really goes after things, and I’m so impressed with all the women I’ve met at Maestra. I mean, I hear what people are doing, and I think, “This is great!” I don’t think there was anything like this when we came to New York. I certainly didn’t hear about it if there was. And there weren’t that many women around. Now there are lots of women that are working in orchestras on Broadway, but I think back in the 60s that there weren’t that many. And I remember one time, I was a rehearsal pianist for a show on Broadway, and I asked somebody where the women’s bathroom was, and they didn’t know so somebody else had to be asked, and then the contractor came up and he got very angry, he said “This is why I don’t want women in the pit! We don’t have a bathroom for women!” Well, [laughs] “Okay, I’ll just… go out to the lobby…” I mean, it’s unbelievable now. These are things you wouldn’t think would have happened, but they really did.

JM: That’s insane. So now, we have Maestra…how do you think it can help?

Nancy Ford: I think the very fact of its existence is very helpful to people. There’s always been an old boy’s network. I don’t guess we’d like to be called an old girl’s network, but, why not? It’s wonderful to have that support system and to share what’s going on. There are so many people doing interesting things that we don’t even know about– that the public barely knows about. Things in smaller theaters, or outside New York… the night Gretchen and I spoke at a Maestra meeting, everybody was talking about their projects, and we thought they all sounded so interesting. There’s a lot of really smart, interesting stuff going on. And if I had a show coming up– see, the thing about Gretchen and me, we have worked with a lot of people already, so we already know the people that we like working with. But there are people I met at Maestra that I thought, “Oh, I wonder if… I think she’d be good to orchestrate my show.” That would be a nice thing to be able to do. I would like to be able to work with somebody from there.

JM: And why should people care about what Maestra is doing, and the equality and visibility we’re striving for?

Nancy Ford: People should care that women have an equal place in the world. And any organization that promotes that, therefore, is a good thing. It’s a human right. Women should have the same rights as men. And I think that’s coming in many areas. We’re seeing women stepping out more than they have before.