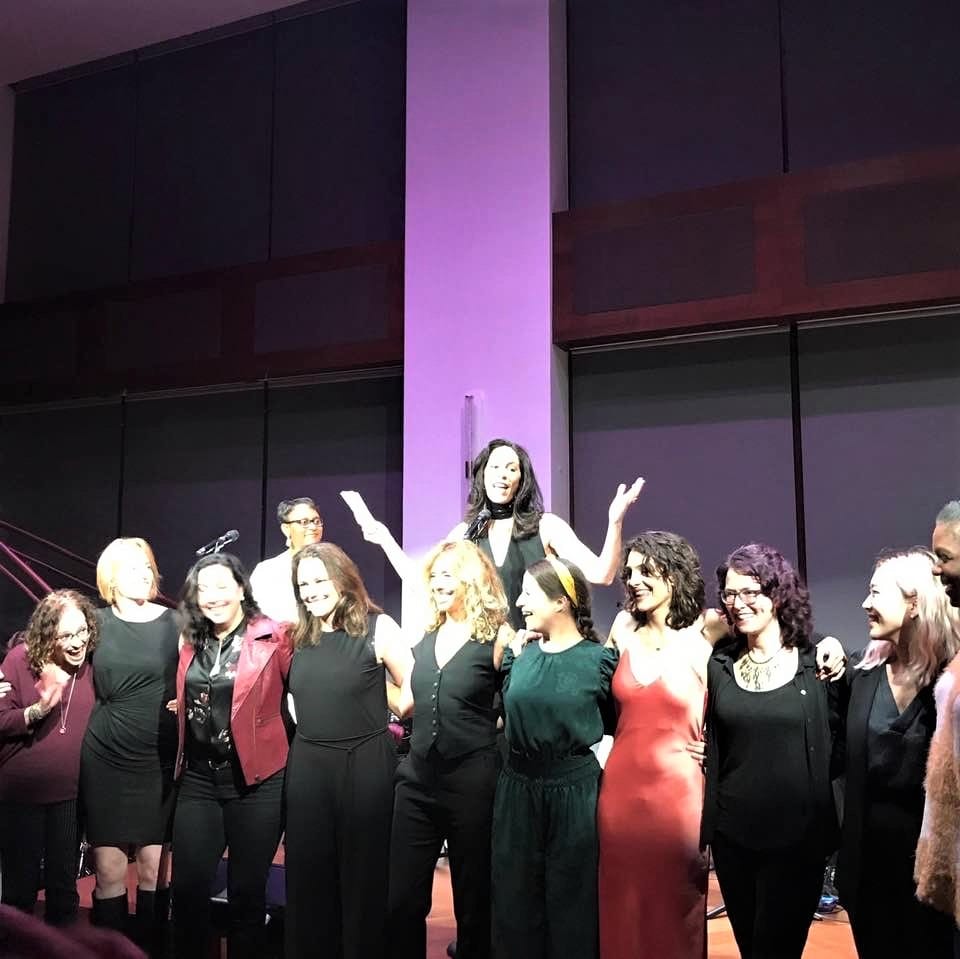 This past March, Disney on Broadway held their 2nd annual Women’s Day on Broadway: Inspiring Changemakers. The event shined a light on people and organizations creating change and progress in the theater and entertainment industry, sharing ways that each person can become an agent of change. Maestra was honored to be included in the event and featured as a changemaker. Georgia Stitt was invited to give a speech, and she summed up Maestra in a beautiful nutshell:

“We are the women who make the music in the musical theater industry. Our organization provides community, visibility, and opportunity to the many women who work as musical theater composers and lyricists, music directors, orchestrators, arrangers, rehearsal pianists, pit musicians, copyists, vocal coaches and music contractors. I’m a composer and a music director myself, and two years ago after I premiered an original piece, a woman in the audience came up to me and said she’d never heard a piece of music composed by a woman. I thought about how many times, after conducting a show, someone from the audience had told me they’d never seen a female conductor, and it seemed absurd to me when I know so many women who are writing and producing theater music. So, I did what women do: I had a party and I invited all my girlfriends. Two years later, that party has grown into a national not-for-profit organization.

MaestraMusic.org now has a searchable database of female theater musicians as well as an interactive timeline charting the history of female composers on Broadway. Did you know that if you took every show with a female composer that was ever produced on Broadway, and revived them all in the same season, you wouldn’t even fill every Broadway house? We want to change those numbers. We’ve got a mentoring program in partnership with the New York Youth Symphony, we’ve got a music directors training program, we’ve joined forces with both The Musicians Union and The Dramatists Guild, we’re a sister organization to The Lillys, and we’re creating networking events, facilitating commissions, and offering technical workshops to our members on a monthly basis.”

After Women’s Day on Broadway, Disney reached out to Maestra to set up a follow-up event in their Spotlight Series. That follow-up event became the incredible concert that took place last night: The Full Score: Today’s Women of Musical Theatre. The concert was held at Salon 70, a new state-of-the-art concert venue located in a private home. The audience consisted mostly of Broadway producers and industry professionals, with only a very limited number of tickets available to the public through an online lottery.

Because this is a blog post and not a newspaper article, I’m going to be candid with you: this event kicked ass. I’m sorry. Maybe there’s a fancier way to say that. But it was a star-studded evening from top to bottom in an absolutely gorgeous venue, with host Laura Benanti continuously charming the pants off a fully sold out (standing room only) house of important people while Broadway performers took to the stage to sing brilliant music with an all-female band.

If I tried to sing the praises of all of the amazing people and songs involved, it would not be a blog post, it would be a novel. So please feast your eyes on the program.

This concert was such a gift. Major recognition and thanks needs to be given to Anne Quart, Danielle de Matteo and the staff at Disney, Masque Sound whose generous donation made the evening possible, our producer and host Jenny Niederhoffer, our director Schele Williams, and of course Georgia Stitt for pulling together this very special evening.

It was important for Maestra, but also for musical theater lovers who will have doors opened for them to so much fantastic music when more events like this take place. This is just the beginning of all the good that Disney and Maestra can do for sharing the works of female composers and lyricists.

On that note (pun intended), Maestra is launching a new initiative to share music by the women of Maestra with the world: Maestra DJ. We’re gathering some of our favorites by female composers & lyricists and organizing them into playlists on social media streaming services. For now, as it’s just getting started, we have master playlists on Maestra DJ YouTube and Maestra DJ SoundCloud, but over time, we’re planning to expand to other services and to create specific playlists (High-Energy Mix, Just-Got-Dumped Mix, Chill Night at Home Mix, etc). If you’re a Maestra member and you want to be included, please send your best YouTube or Soundcloud links to [email protected]! If you have questions about criteria or how many songs to send, you can ask via email at that same address.

To conclude this post, here are some things that made my ears ring last night:

The presenters offered us a list of things we can do right now​ to be part of the way the industry is going to change, and I’ll leave you with these ideas.

1. ​HAVE ONE MORE CONVERSATION​. As you’re putting together the team for a project, pause and ask: do these storytellers represent the story we are telling? Do we have contrasting points of view? Do we need to have ​one more conversation​ about this?

2. ​FIND YOUR KEYS​. If you lost the keys to your apartment, you wouldn’t say, “Oh well, I tried; I guess they’re not there.” You would ​keep looking until you found them​. So keep looking, and if you need a searchable database to help you figure out who’s worth considering — start with the Directory at MastraMusic.org.

And finally…
3. ​KEEP THE DOOR OPEN​. When you have an opportunity to bring a “plus one” to a show or an event, bring someone with you who would also benefit from being in that room. If you have to turn down a job, recommend a woman or a person of color in your place. When you walk through an open door, make sure that door stays open for others who are right behind you.