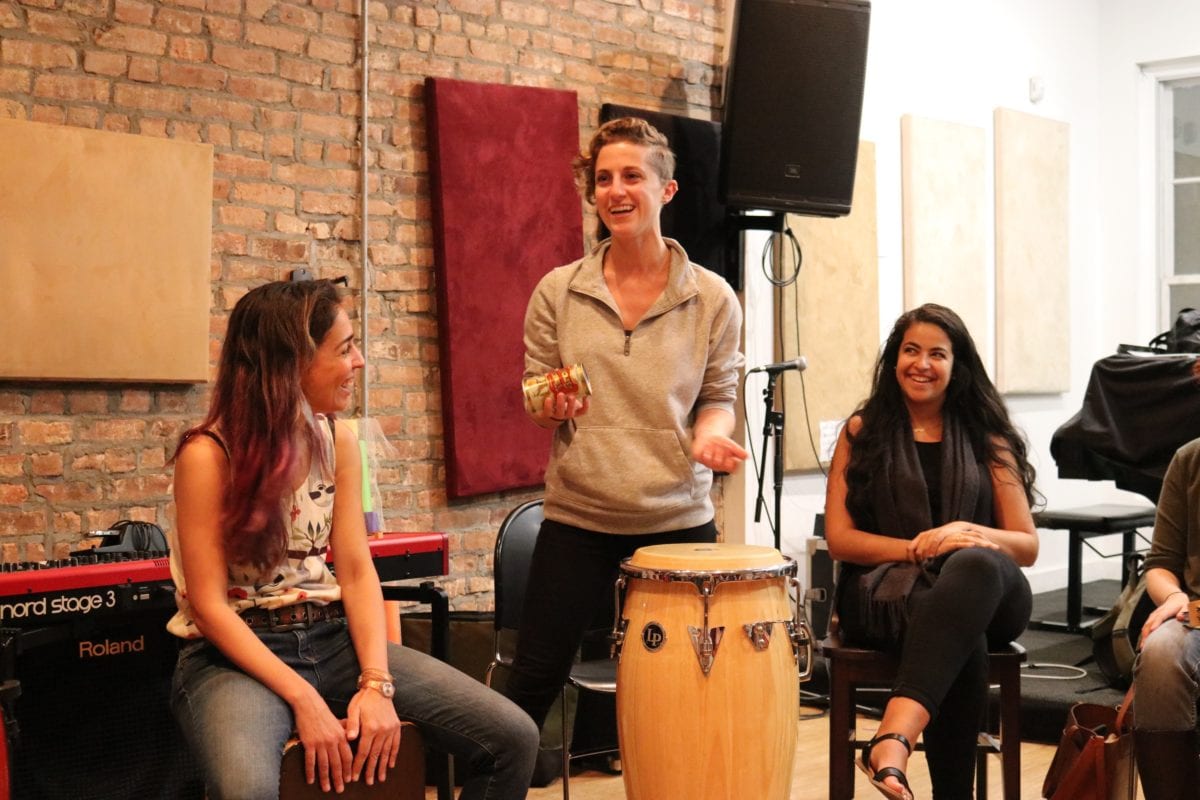 As some of you know, this fall, Maestra is starting to offer professional development workshops in a variety of technical areas. Sunday night, Maestra kicked off the first of these offerings with a bang! The Hands-On Percussion workshop was led by Elena Bonomo (drummer for A Strange Loop and the national tour of Waitress), Rona Siddiqui (our most recent “Women Who Wow Us” spotlight and this year’s Billie Burke Ziegfeld Award winner), and Macy Schmidt (orchestrator, currently working as the music assistant on TINA: The Tina Turner Musical).

In a cozy room at Michiko Studios filled with different types of drums and shakers, we alternated between getting instruction on how to play the instruments and having mini percussive jam sessions.

After that, we talked about how percussion is notated. Elena Bonomo talked us through the anatomy of a drum set and played examples of different types of grooves. We followed along on a notation sheet Macy had made for us on Finale.

Towards the end of the session, Rona offered up an opportunity: who would like to hop on the piano and try playing a groove with a drummer? (The groove, by the way, was “Love Song” by Sara Bareilles). In most settings, I know what would have happened at that moment: I would have wanted to try, but I would have been nervous about screwing up even though I have banged out the chords of “Love Song” 1,000 times, and while I hesitated, someone else probably would have raised their hand, and that would be that. But that’s what I love about Maestra. At Maestra, you’re supported, and you’re safe, and if you play a D chord instead of a D minor, there is no Greek chorus of gatekeepers shaking their heads being like “See, This is Why Girls Shouldn’t Plaaay.” So I volunteered first. And it was fun.

There were a lot of things I loved about the percussion workshop, besides the obvious fact that it was incredibly informative and fantastically effective at giving us a first foray into learning percussion.

I am constantly, constantly impressed by the women around me every time I come to Maestra meetings and events. These women are going to change the freaking world.