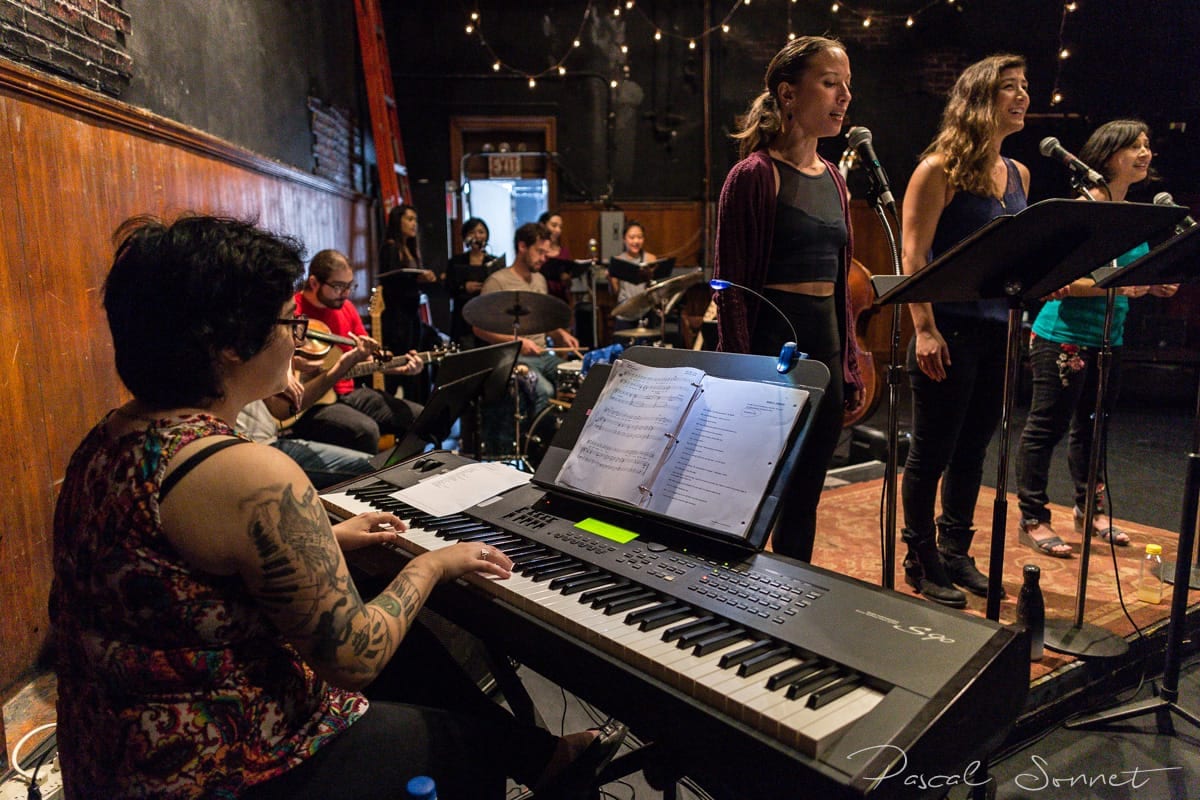 The composer is the author of the music. Music must be “fixed in a tangible medium of expression” in order to be copyrighted, but the author of that music is the composer. In traditional musical theater forms, a composer will work in conjunction with a lyricist and a bookwriter and be entitled to one third of the authorship of the musical. Depending on the show’s collaboration agreement, however, this is entirely negotiable.

The arranger is the person who turns the composer’s music into a functioning score. Traditionally, a Broadway-style musical has need for a VOCAL ARRANGER (who creates all of the vocal harmonies and textures), a DANCE MUSIC ARRANGER (who works in tandem with a choreographer to create the dances), and an INCIDENTAL MUSIC ARRANGER (who writes the scene change music, the overture and the entr’acte and the bows and exit music). Sometimes the composer does all of his/her own arranging. Sometimes the music director or orchestrator does the arranging. And sometimes a separate arranger is required for each of these subcategories. These jobs can be either fee or royalty based, depending on the contract.

The orchestrator takes the score (usually but not always a piano/vocal score) generated by the composer and arrangers and expands it from its rehearsal version into the version that will be played by the orchestra. The orchestrator decides, along with the composer, which instruments will be used and what notes each instrumentalist will play. Orchestrators’ fees are based on a scale determined by the musicians’ union, but they often also get a weekly royalty.

The music copyist takes the full score delivered by the orchestrator and generates individual parts that go onto the stands for each musician, including the conductor. Originally music copying was done by hand, but now most frequently it is a very detail-oriented computer notation job. Music copyists’ fees are based on a scale determined by the musicians’ union. Traditionally they do not get a weekly royalty.

The music director is a member of the creative team, along with the director and the choreographer and is involved in every musical decision of the production, usually as a partner to and/or advocate for the composer. These responsibilities include the hiring of all musical personnel, representing the music department in casting, teaching the music to the actors and instrumentalists, maintaining the musical integrity of the show (including changes) through rehearsals and performances, conducting (and sometimes playing) the show from the orchestra pit, supervising and approving the subs in the pit, and building and maintaining future incarnations of the show if the production moves forward. For some productions, the music director can be the entire music department, but on larger productions, the jobs can be divided among a MUSIC SUPERVISOR, a MUSIC DIRECTOR/CONDUCTOR, an ASSOCIATE MUSIC DIRECTOR, an ASSISTANT MUSIC DIRECTOR, a MUSIC ASSISTANT, and maybe even a MUSIC INTERN, in that order of hierarchy. (Sometimes a conductor is hired separately from the music director job, and sometimes the music director sticks around after rehearsal and is also the conductor.) Each of these jobs generates a weekly fee.

The rehearsal pianist plays piano for all of the rehearsals. Sometimes the rehearsal pianist is also holding down either associate music director or arranger responsibilities, but not always. A rehearsal pianist might also work as AUDITION PIANIST. Some productions will also hire a REHEARSAL DRUMMER, especially for a dance-heavy show. Rehearsal and audition musicians can be paid weekly or hourly depending on how much their presence is required.

The players in the band or orchestra are called pit musicians. There are the regular players on each instrument and there are also SUBS on each book, meaning each player is required to have a musical “understudy.” Musicians get paid a fee per service, meaning per show or rehearsal as ascribed by the union.

This is basically two titles for the same job. The music contractor is the person who hires all of the musicians, keeps track of their (and their subs’) paperwork including attendance, payment, union work dues. A production may have a contractor to help with the original staffing of players and also an IN-HOUSE CONTRACTOR (who is one of the show’s musicians) to deal with the week-to-week details of the goings on in the pit.

OTHER JOBS ADJACENT TO A THEATRICAL MUSIC DEPARTMENT: