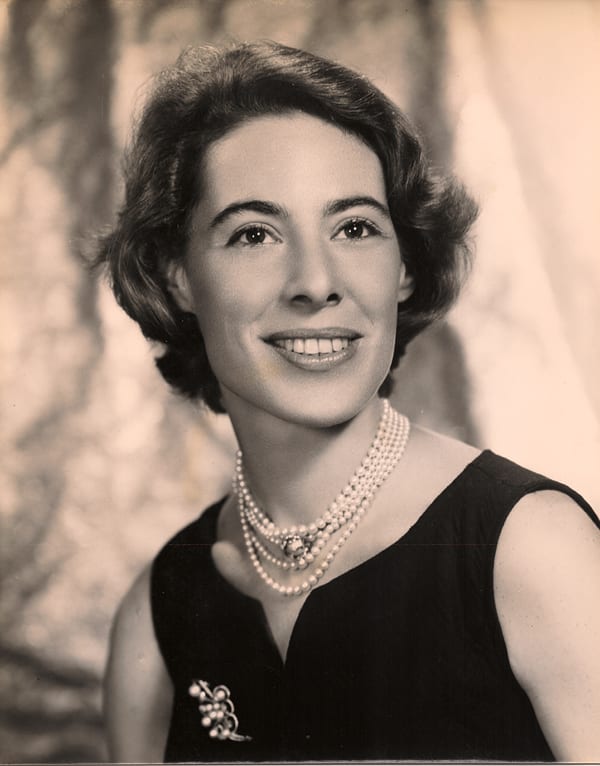 By Mary Rodgers
Composer of the score of “Once Upon A Mattress” and of “Carte Blanche” scheduled for Broadway this fall (1960).

This essay was originally published in 1960 in The New York Herald Tribune, a newspaper that ceased publication in 1962. Many thanks to Jesse Green and Ted Chapin for their assistance in identifying the source.

Tomorrow the man is coming to vacuum my piano. The inside of my piano. This operation will take the better part of an hour and is guaranteed to produce a potpourri of small, ill-assorted items. I predict three lollypop sticks, a couple of pennies, a Black Wing pencil and part of a tomato sandwich. Of course, I could be entirely wrong. It might be five lollypop sticks, a four-cent stamp and an art gum eraser. Well, whatever it is, I’m beginning to think I don’t need a piano tuner anyway. What I need is to get rid of the piano or get rid of the children, and neither alternative seems practical at the moment.

I am a composer. I am also a woman. Now, although these two facts shouldn’t necessarily be mutually exclusive, it appears that there are a lot of composers in the world and a lot of women in the world, but with the notable exception of Dana Suesse, Kay Swift and Peggy Glanville-Hicks, there are precious few all-in-one combinations. (Come to think of it, there isn’t even a name for us. Composeress? Composerette?) Are we such an anomaly? (Anomaless?) Why is there such a dearth of us, especially in the theatre?

NO MYSTERY AT ALL

At the risk of sounding like a feminist, I would like to point out that although there may be very few women composers, there are also very few women painters, politicians or pilots. And what about sandhogs? Where are the women sandhogs? Where are the women in the field of under-water demolitions? Since the emancipation of our sex only began a few hundred years ago, even now, there are more women mothers than anything else.

The average woman, mother or not, hasn’t the vaguest notion of how to write music. It has probably never occurred to her that she could; what’s more, it has undoubtedly never occurred to her to want to. People rarely want to do something they are convinced they can’t do, and the art of composing has always had a quality of mystery about it. “How do all those tunes come to you? Do they just pop up in the middle of the night?” (In my house, nothing pops up in the middle of the night except a window shade or a sick child.)

In actuality, there is nothing at all mysterious about writing music, but unlike writing words, which the average housewife does all day long, it requires a certain technical proficiency. Piano lessons are a beginning, but the era when the gracious matron entertained her guests with “Rustle of Spring” after dinner has long since given way to the era of the hi-fi and the TV.

Majoring in music at college is also a push in the right direction, but it’s interesting to note here that at my own college– a large Eastern liberal arts establishment– there was no music composition major available. You could major in music appreciation, of course, but appreciating music is something you can do without going to college. Composing, on the other hand, is a far more exacting process, and although a musical education isn’t obligatory, it certainly helps.

That there are so few women composers around cannot be attributed solely to the fact that they are not equipped to compose. There is also a little thing called environment. The country must be full of talented women, I know it. The trouble is, they don’t know it.

I was fortunate enough to grow up in an extraordinarily creative atmosphere. My father wrote music, my sister wrote music, my mother wrote checks. (She also invented things, ran a brilliant repair shop and decorated apartments.) A high premium was put on imagination; we were listened to, we were encouraged, and we were bewitched by the sounds and sights around us. It was fertile territory and we grew there for eighteen years.

We were respected for our creative attempts, despite our gender. But if a girl from a small town in the Middle West wants to write music, she is plainly some kind of a nut. Composing is not done by girls. Light verse, maybe, but composing, absolutely not. Otherwise, why would there be so few girl composers? Writing music is obviously not considered to be an appropriate female profession.

The question of femininity comes up all the time, these days. This is not the place for a sociological treatise on the role of women in our society, but after doing a little research on the subject, I want to announce that Sophocles is definitely off my list. I am never going to read him ever again, not even in paperbacks. It was Sophocles who said, “Women should be seen, not heard!” In the first place, I always thought it was children who should be seen, not heard, which is something I do agree with, but in the second place, any man who was writing that long ago should be more careful about what he writes. I’m sure he meant it as a joke, but antiquity lends credence to even the most ill-considered of statements, and Sophocles has influenced a lot of people.

Men, some of them consciously, most of them unconsciously, don’t want to believe that a woman could possibly be competent at anything but child-bearing and home-running. And if a woman is incontrovertibly committed to a successful career, the less obtrusive she is about it, the better.

As far as the creative arts are concerned, some are more suspect than others. The literary field is acceptable because it’s a nice quiet kind of thing you can do around the house, and your husband might even think you were just writing a letter or a grocery list while he does the dishes. Furthermore, a publisher can read your manuscript, accept it, and sell it to the movies, but if by the time he finally meets you you are wearing a hat with a veil, his preconception of femininity remains intact.

Composing for the theater, however, is another dish of tea altogether. In the first place, it is not a nice quiet kind of thing you can do around the house– it’s excruciatingly noisy and maddeningly repetitive– and your husband knows perfectly well what you’re up to.

Then, too, most producers don’t want you to send in tapes or demonstration records. They want you to come in and demonstrate the music yourself, and because you are a woman and play the piano like a woman, they are inclined to think your music has a feminine quality. You can, of course, pound the keys vigorously and belt out all the tunes including the ballads, but then they won’t like you or your music. Either way you’re cooked unless you get some man who plays like a man to accompany you while you sing like a woman.

But the suffragette tide is turning. There’s a line in “West Side Story,” “You’re a girl, be a girl.” It happens to have been spoken by a boy, but the fact is that girls do want to be girls. Today, partially because they are constantly accused of usurping a man’s role, they want more than ever to look feminine, think feminine, be feminine. In some creative fields, this is possible, but if you want to succeed in the theater, you must be aggressively on your toes at all times. The theater necessitates face-to-face competition; if you don’t make the phone call, or ask for the job, or initiate the project, someone else will. And someone else usually does– because the average Jane, even a creative one, would prefer to let George do it rather than endanger her own preconception of herself as a woman.

Working in the theater is fundamentally a collaborative effort. There are constant meetings, auditions, rehearsals, late hours. If you’ve written a book, you don’t have to go on the road with it, but if you’ve written a show, your husband may have to phone you at the Taft Hotel, Kaysey’s or the Shubert Theater in New Haven in order to tell you that he can’t find the children’s snow suits. By the time you get home after a seven-week tour, you’ll find the snowsuits, but you just might not find your husband. Few women want to run that risk.

So there it is: give a woman the right intellectual climate, give her a musical education, give her the herculean amount of strength needed to get up with the children at 7 and go to bed at 2, give her an understanding husband, supreme confidence in herself as a feminine being, and a little talent on the side, and she may turn out to be a composerette if she’s prepared for the wear and tear on the stamina, the feminine ego, the masculine ego and the Steinway.