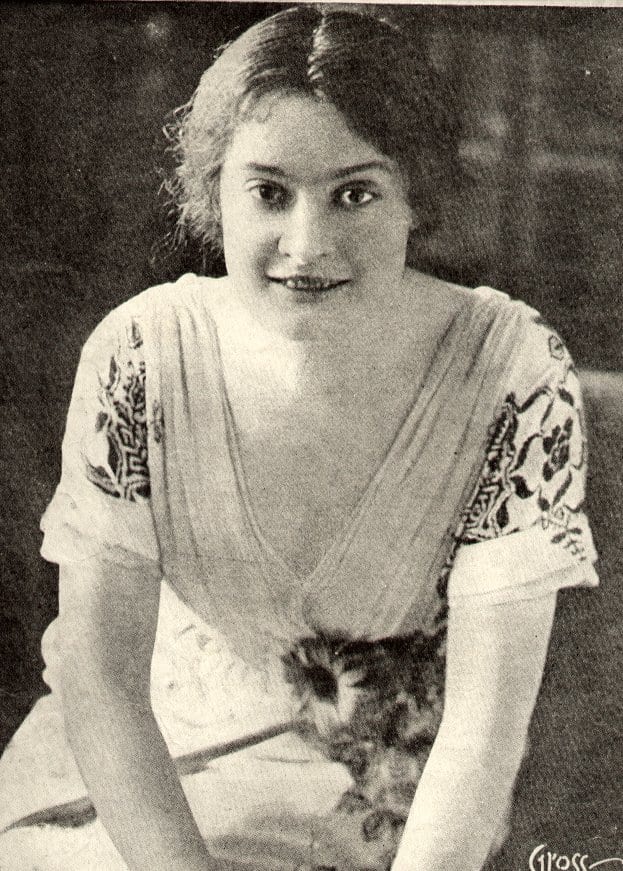 Researched and Written by Sarah Whitfield

Nora Bayes’s prodigious career saw her work across multiple industries – she was a lyricist, composer, performer and producer. She’s even been called the Beyoncé of her day. As a singer, she was the first to record George Cohan’s “Over There” and to perform “Take Me out to the Ball Game,” and she sang the very first song in a musical by George and Ira Gershwin: “The Real American Folk Song (is a Rag).” She recorded over 100 songs, including songs by Irving Berlin, was called the ‘Queen of Vaudeville and Musical Comedy,’ and with her impressive tastes in millinery, even had hats named after her. Somewhat more impressively, in 1922 she was the first woman to have a Broadway theatre named after her: the 44th Street Theatre was renamed the Nora Bayes Theatre. (Sadly, it was demolished in 1945.) One report suggests that she leased the theatre herself and renamed it under her own name, though it’s hard to know this for certain at the present. 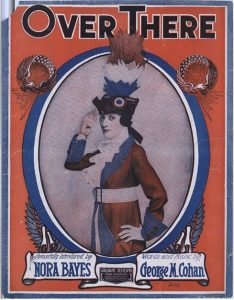 Bayes was a prolific composer and enjoyed far more success in terms of contemporary recognition than Cissie Loftus did, although they were quite similar as performers and even appeared on the same bill together at the London Palladium. Over the years doubts have been expressed about whether all of the music could have been Bayes’ or whether she merely claimed credits as a result of her stardom. Unless a forensic musicologist wants a project, we won’t conclusively know, but many male composers also churned out numerous sheet music hits, and somewhat less suspicion is attached to them. So with the caveat that if she did not, she was an extraordinarily savvy businesswoman– let’s assume she did in fact write all of the music associated with her name. It is worth noting that her current entry in Grove Music Online (now Oxford Music Online) does not mention her work as a composer at all.

Of all Bayes’ compositions, ‘Shine On Harvest Moon’ remains the most famous. The song was co-written with her then husband, Jack Norworth, and released both in sheet music in 1908 and as a recording in 1909. Since then it’s been recorded and performed by artists as diverse as Laurel and Hardy, Vera Lynn, Nat King Cole, and Liza Minelli. No one-hit wonder, Bayes composed a huge range of material from comedy sailor songs to suffragette songs like ‘Everyone Say Aye.’

Since I couldn’t find a recording of that one, I asked Dr. Sarah Browne and Shelley Marsh, one our of students at the University of Wolverhampton, to record it. In the recording there are two verses, presumably one for Nora and one for Jack, and then a rousing chorus. It is not particularly a song about suffragettes, as you’ll see, more about the idea of voting. But nonetheless, in 1910, it gently pokes fun at the male verse. (Only the male verse has an expense at the singer.)

A singer comes out on the stage,
And sings a song that’s all the rage,
Then asks the audience to join the chorus of the song
The folks out front think this is fine
And sing the chorus line by line,
The singer gets the credit,
which I think is very wrong.
This should be stopped, I vow.
And I can tell you how;
We’ll take a vote and see if we can’t stop this thing right now.
Ev’ry one in favor say “Aye!”
In favor say “Aye!” in favor say “Aye!”
In this campaign just yell like Cain
And we’ll pile up the votes to the sky;
Any one to the contrary, “No!”
Contrary “No!” Contrary “no!”
Let’s show we’re strong and all shout along with me,
Aye! Aye! Aye!

Bayes refused to obey the social mores that ruled expectations of how women should behave. Her personal life caught the attention of the press: she provided endless headlines for her broken theatre contracts and her five divorces. Her marriages were reported across the globe: On news of her fifth marriage, one Australian newspaper reported her advice to wives: “as soon as one becomes bored, one should secure divorce.” The press hardly knew which was more shocking, her divorces or the fact she had walked out of her contract with Florenz Ziegfeld. M. Alison Kibler notes that “Bayes relied on her own charisma and popularity as she resisted managerial control and ignored the details of legal contracts.”

Like Cissie Loftus and Clare Kummer, Bayes built much of her career on the performance of c–n songs; her picture is on the score of ‘Ma Black Tulip’ (1900), and her portrait appeared on the sheet music for George Cohan’s ‘Oh! You Beautiful C–n’ (1911). It would seem that unlike her contemporary Sophie Tucker, Bayes did not perform in blackface, but rather in adopting an Irish performance style. Academic Pamela Brown Levitt writes that “Bayes [cultivated] an incongruous Irish persona: the All-American Girl Next Door with Yiddish wall ornaments and lots of ex-husbands who interpolated Jewish names into Emerald Isle melodies sung in an Irish brogue.”

We know very little about Bayes’s actual upbringing– she gave conflicting stories in the press– but there’s some suggestion she was born in an Orthodox Jewish family and ran away to the stage. She certainly played with her Jewish identity on stage, by a playful, albeit problematic, engagement with an Irish identity. To our eyes, this is all somewhat perplexing (and again, uncomfortable), yet it also reflects her sense of what was desirable on stage and an acute understanding of managing audiences.

She had a long running association with Ziegfeld’s Follies. In 1907 she performed her Irish ‘mammy’ character, in the song ‘You’ll have to sing an Irish song’ and in the 1908 edition, she appeared as ‘Satanette.’ In the 1908 Follies she was being paid $450 a week, far more than her then husband who was her partner in the act. When she left, breaking her contract, newspapers quickly reported that she had done so because Ziegfeld had insisted that she wear tights (a body stocking) and sit on an elephant. She explained, “I told him I had never worn tights and did not purpose [propose] doing so, while on the elephant’s back or anywhere else.” In the courtroom, having essentially prevented her and husband from working for anyone else, Ziegfeld told the judge he would have Bayes back and pay her $1,000 a week, but he wasn’t interested in her husband.

Like Cissie Loftus, Bayes’ performance style also seems to have drawn on mimicry and impressions: one contemporary reviewer of her appearance in the 1909 Follies noted ‘the field of musical comedy is in need of such talent as she possesses.’ By 1913, Variety reported she would be earning $2,500 a week when she left The Sun Dodgers and went into New York vaudeville.

One of Nora’s accompanists was none other than a young George Gershwin, yet to enjoy the level of financial success that was to come. Howard Pollack records that on one out-of-New York tour of Ladies First in 1918, Bayes tried to make Gershwin change the ending of his song, ‘The Real American Folksong,’ but Gershwin refused. Bayes replied, “You’re a mere kid! Why Irving Berlin or Jerome Kern would make the change for me at the mere suggestion.” Pollack hints that such disagreements may well have been the reason Gershwin left the tour. Bayes’ power can perhaps be reflected in the fact that by 1922 she was described as having “a trio of male assistants” at Winter Garden theatre in her vaudeville act.

Bayes did not just compose and perform; she was constantly seeking out new ways of building her career. As early as 1918 it was reported that “Nora Bayes has indicated a willingness to go into pictures […] She has taken a test and is satisfied she will screen well.” While information is currently sparse on what led her to take the lease on the theatre, she certainly took on producing roles. She produced Her Family Tree (1920) and was reported in 1922 as working on another show. “[She] has secured a new play which she will produce under her own management early in the fall.”

The songs that Bayes performed at the beginning of her career perpetuated racist stereotypes: like Clare Kummer and Cissie Loftus, she created vaudeville acts around them and other kinds of ethnic humour. She performed at the same time and on the same bills as key African-American musicians: in 1905 for example, she performed on the same bill as Abbie Mitchell and her students. (Mitchell was the wife of Will Marion Cook, and an important singer in her own right.) Like Loftus, Bayes’ music appeared alongside that of key black composers: Miss Innocence in 1908 had music by Bob Cole and J. Rosamund Johnson. But I’ve not come across any explanation of how that happened or whether they were ever in the same room. Given the sheet music industry at the time, they may not have been, but something about Nora Bayes suggests she would never have missed an opening night party.

Nora was only 48 when she died in 1928, during an operation to attempt to treat cancer. She left behind her three children, who her fifth husband, Benjamin Friedman, continued to raise. Mr. Friedman, for reasons which were never clear, refused to arrange for her to be buried, so her remains were kept in a state of limbo. After he died, his second wife arranged for them to be buried in an unmarked grave. It wasn’t until 2018 that a group of fans, and Bayes’s granddaugher, arranged for a marker to be made at the Woodlawn Cemetery in the Bronx.

Researching women’s contribution to musical theatre, particularly composers, is messy and often incomplete. We don’t know all of Bayes’s story, and we don’t know whether she intended to compose more music (a whole show for example) or whether her work was a consequence of her performance practice. But even with all the gaps in the story, she was part of the bigger story of the musical theater, and she should be remembered.

‘Mad Opera House’ (music and lyrics by Bayes and Norworth)

‘Blarney’ (music and lyrics by Bayes and Norworth)

‘Come Along, (My) Mandy’ (music and lyrics by Bayes and Norworth)

‘Young America’ (music and lyrics by Bayes and Norworth)

‘No More Staying Out Late’ (music and lyrics by Bayes, Bert Lee and Norworth)

‘I’ve a Garden in Sweden’ (music and lyrics by Dan Lipton, C. W. Murphy, and Hugh Owens; American version by Bayes and Norworth )

‘(For) Months and Months’ (music and lyrics by Bayes, Norworth and Joe Tabrar)

‘Pinkerton Detective Moon’ (music and lyrics by Bayes and Norworth)

How Can They Tell That I’m Irish? (music and lyrics by Bayes and Norworth)

‘Pinkerton Detective Moon’ (music and lyrics by Bayes and Norworth)

‘The Stolen Melody’ (music by Bayes; lyrics by Phil Schwartz)

‘Fancy You Fancying Me’ (music and lyrics by Bayes and Norworth)

Ladies First (1922) (cast recording of some songs was made, see here)

‘Who Do You Suppose Married My Sister?’ 1910 (music and lyrics by Bayes and Norworth)

Just Like a Gypsy (1919) (lyrics Seymour Simons, music by Bayes)

Sarah Whitfield (@sarahinthepark) is Senior Lecturer in Musical Theatre at the University of Wolverhampton, UK. She is a musical theatre researcher, practitioner, and academic. She writes about theater history with a particular focus in uncovering the work that under-represented and minoritized groups do, and have done, in the arts. Her recent publications include Boublil and Schönberg’s Les Misérables and, as an editor, the 2019 collection Reframing the Musical: Race, Culture and Identity.