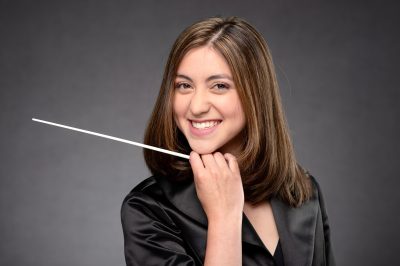 Veronica Leahy is a multi-woodwind player, pianist, composer, and music director currently enrolled in the Harvard and Berklee dual degree program. She was selected as composer for the Hasty Pudding Theatricals and Harvard’s First-Year Musical and was named an emerging composer by the Tribeca New Music Festival. She serves as the music director for the Harvard-Radcliffe Gilbert & Sullivan Players and a music assistant at the American Repertory Theater. Since starting college, she has performed multi-woodwinds at Dizzy’s Club Coca Cola, the Ravinia Music Festival, the Monterey Jazz Festival, with Terri Lyne Carrington and the Berklee Jazz and Gender Justice Institute, and more. Veronica also produced and artistic directed the first-ever Harvard Composers Festival.

In high school, she received national recognition in both classical and jazz saxophone through her selection in ensembles such as the 2018 Grammy Jazz Band, the 2018 National YoungArts Foundation jazz combo, and the 2017 and 2018 Honor Band of America. Notable performances include appearances on the Late Show with Stephen Colbert and with Wynton Marsalis and the Jazz at Lincoln Center Orchestra.