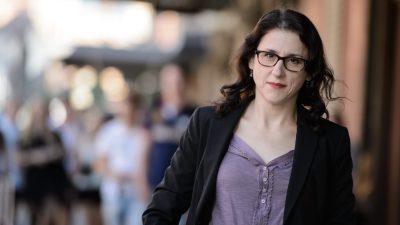 A musician and music director who has played in venues ranging from musty church basements to Carnegie Hall. An award-winning composer whose work for film, new media, and live performance ranges from the stalwartly classical to the downright quirky. A music journalist who enjoys engaging with celebrities and high school band geeks alike. A director, music consultant, arts administrator, music supervisor, and more: Susan Poliniak (she/her) is doing her darnedest to stay busy while simultaneously keeping the lights on.

As a conductor and music director, her credits include the promotional concerts for Sony Classical’s Topsy-Turvy soundtrack, work with the Westchester Oratorio Society and New York City’s Queer Urban Orchestra, and concerts at New York City’s CAMI Hall. Her conducting studies include work with Peter Bellino, Rudolph Palmer, and Gary Fagin.

As a music supervisor and consultant for film and other media, she specializes in the areas of classical music, jazz, popular music from the late 19th century to 1940, world music, and classic rock. Her credits include the Go Babies video Alphabet Road: F is for Farm (winner of a 2003 Parents’ Choice Approval award), the WNET/Thirteen and Annenberg Foundation/Annenberg Learner “Music Mentor” interactive for their NETA Award–winning series The Power of Music, and director Lisa Hammer’s feature film The Sisters Plotz, for which she also composed and arranged a portion of the score.

Her compositional credits include the scores to the independent short films Heartlight (Official Selection of the 2012 New Filmmakers NY Series, Anthology Film Archives) and Vegetables (2006 Festival Internacional de Cortometraje de Bilbao, 2007 New European Film Festival), and the independent feature film All in Theory. Other commissions have included arrangements for the Brooklyn-based ensemble Tutti Harps, music for Byte Interactive/Story Worldwide, arrangements and MIDI realizations the American Standards series from Cherry Lane Music Publishing, and sacred pieces for recital and worship. Her MIDI work can be heard in the orchestrations for the Broadway tours of Thoroughly Modern Millie and Flower Drum Song.

Susan’s vocal performance credits include recitals, concerts, work as a cantor and soloist in churches in Philadelphia and Manhattan, and roles Off-Broadway and at the University of Pennsylvania’s Annenberg Center, Philadelphia’s Merriam Theater, the International Gilbert & Sullivan Festivals in Berkeley and Philadelphia, and others. Her voice can be heard on recordings by the composers Tony Silva and Jeffrey Freyman. A classical guitarist since childhood, she has also performed as a pianist and orchestral percussionist with groups such as New York City’s Big Apple Corps, including in their 2003 concert at Carnegie Hall with the New York City Gay Men’s Chorus.

In addition to her work in the worlds of music and music journalism, Susan is a proud SAG-AFTRA actor who specializes in playing musicians. She can be seen scowling in the percussion section of the New York Symphony in Amazon’s Mozart in the Jungle, conducting a church congregation about to be slaughtered en masse in NBC’s The Blacklist, and playing her sitar in Hulu’s The Path.

Susan holds a Bachelor’s degree in English and Music Theory/Composition from the University of Pennsylvania and a Master’s degree in Vocal Performance and Pedagogy from New York University, and has studied composition, orchestration, film scoring, conducting, and jazz piano at the Mannes College of Music. A Writer and Publisher member of ASCAP, she is the recipient of eight ASCAPlus Awards.