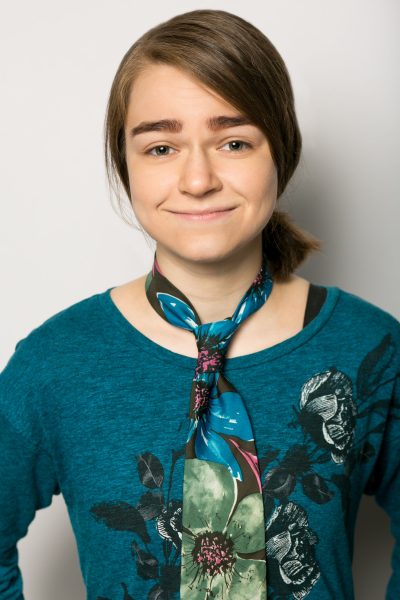 Socks Whitmore (they/them/theirs) is a multidisciplinary performer, composer, and storyteller based in Los Angeles. Whether they're writing a new musical, recording voice over, or testing their four-octave range in song, every aspect of their work is rooted in voice and text. The lines between their disciplines often blur; they've contributed music and lyrics to projects such as the Penguin Random House "Narwhal & Jelly" audiobook series, the fiction podcast "Georgie Romero Is Done For," and animated films like Jeongho Lee's "Heartstrings" after initially being brought on as a voice actor! From writing the book, lyrics, and music to original musicals like "We Are Here" (New Voices Project winner 2019) and "Pass" to originating roles in new works like the ballet operetta "Children Cannot Sleep" and the new musical "The Bully Problem" to the occasional venture into production management, Socks has their hands in all the pockets of the new music theater world. On fancier occasions, they’ve performed in renowned spaces such as the Grand Ole Opry, Carnegie Hall, and the Sydney Opera House. And for those who are curious, they hold a BFA Performer-Composer degree from the California Institute of the Arts (CalArts) with minors in Digital Arts and Creative Writing.