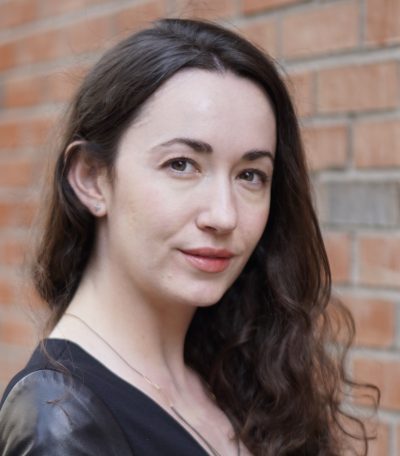 Shoshana Shattenkirk is an interdisciplinary composer, singer-songwriter-storyteller, educator, and pianist. A former stock analyst, her works have been heard at places including Lincoln Center, The BMI Music Theatre Workshop, The Dramatists Guild Foundation, The US Mint, The University of South Florida, Maison in New Orleans, The St Cecilia Music Society, Interlochen, Loyola University New Orleans, Times Square, The Ferguson Center For The Arts, The Dallas Symphony's Myerson Hall, Barnard, The Dramatists Guild Foundation, Touro Synagogue, and others. Born into a family of creatives, she studied piano from age 4, as well as harp, viola, and steel drums as a child. Her first music composition, written at age 6, placed third in the Florida Reflections Competition. By age 10, she had given hundreds of recitals (Maria Lund Royce Volunteer Musician Award) and placed in or won several concerto competitions. Shoshana attended Interlochen Arts Camp for piano (division wide piano award), dance, and theatre and is also an accomplished singer. Passionate about the myriad benefits of a broad Libera arts education, Shoshana received her BA in Latin American Studies from Loyola University New Orleans (Dean's List, dual minors in Spanish and Music, Treasurer of Sigma Alpha Iota women's music fraternity, Vice President of Sigma Delta Pi Spanish honors society, company pianist Loyola Ballet, Intern at Orleans Public Defenders). She is passionate about the benefits of artistic education and has volunteered with children in in The United States as well as Peru and Northern Ireland, and also worked as an au pair in Spain and Germany. After undergrad, she attended Columbia's post-bac pre-med program and then worked as a healthcare stock analyst on Wall Street. Since returning to her professional creative routes, she has been commissioned to write for musical theatre, commercial, liturgical, and film projects. Shoshana has been collaborating with Stygian Hour Productions since April 2018, and is the composer of Fear of Dancing. She is in the advanced class of the BMI Lehman Engel workshop. She is an avid collaborative pianist and a staff musician in the Barnard College Department of Dance. Shoshana serves on the young alumni board of Loyola University New Orleans and is passionate about social justice, cross-disciplinary collaboration, and mental health advocacy. She gratefully counts among her mentors Charles Fox and John Snyder.