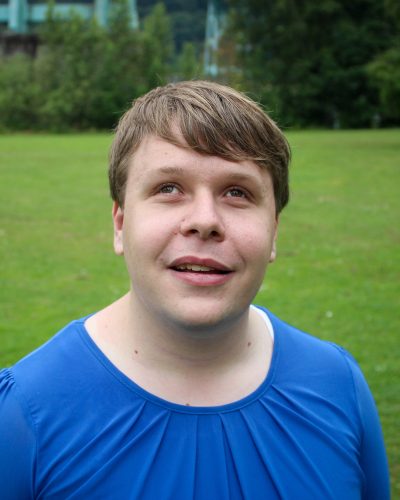 Shane W. Dittmar (they/them) is a blind composer, musician, writer, and educator whose work explores the lives at the crossroads of intersecting identities and the unifying inclusivity of other-ness. Shane lives in Vancouver, WA, with their wife, Kaitlin; cat, Milo; and guide dog, Chevelle. As a teacher, Shane offers every student positive and supportive relationships, a dedication to equity, and high standards based on the student's goals. Shane’s choral compositions have been internationally performed by middle and high school, collegiate, community, and professional ensembles, and their work for musical theatre has been performed at Roundabout Theatre Company as well as colleges and community theatres across the country and especially in Raleigh, NC, where they grew up. Shane knows that their visual impairment gives them a truly unique view of the world and looks forward to using their work to show you what they are able to see.
One of Shane’s great passions is musical theatre. They have written, arranged, and orchestrated music for productions by Raleigh Little Theatre, ArtStream, and Arts Access Inc., as well as collaborated as an arranger and orchestrator with writers including the delightful Sarah Kaufman. In 2021, Dittmar’s original short musical “Like Usual” was featured in Roundabout Theatre Company’s Reverb Theatre Arts Festival, a showcase of theatre artists with disabilities, and songs by Shane have been featured in cabarets and concerts across the country. In addition to composing, arranging, and orchestrating, Shane has worked extensively as a music director for productions such as Into the Woods, Public Works's The Tempest, Pippin, Bat Boy (twice), Rent, and Porgy and Bess, and they have coached and accompanied for numerous concerts and showcases.
As an educator in and out of public schools, Shane believes in equity, inclusion, and high expectations. They are a certified music and special education teacher in the state of Washington, where they spent three years as the music teacher at the Washington State School for the Blind. Their work with students is empowerment-based and recognizes and accommodates the unique needs of every student while never assuming they are anything less than fully capable with the right tools. Shane is especially proud of their work advocating for instruction in music literacy and the music braille code for visually impaired students and of creating safe spaces for all students (especially those who are trans or gender non-conforming, who are neurodivergent, and who experience mental illness) to learn.
Shane’s commercially published choral compositions include “Annunciation to the Shepherds,” a setting of verses from Luke 2, which was published by Hinshaw Music in 2019 and premiered by the North Carolina Master Chorale; “If I Can Stop One Heart from Breaking” (text by Emily Dickinson), published in 2018 by Heritage Music Press; and “Cantate,” a 2016 psalm setting which is published by Hinshaw. Shane’s experience as a music educator and vocalist helps them to create memorable, teachable, and singable parts for choirs of all abilities, which is why several of their pieces have been selected for inclusion on sheet music retailer J.W. Pepper’s Editor’s Choice lists. They have also independently published compositions through MusicSpoke and are always writing something new for people to sing.