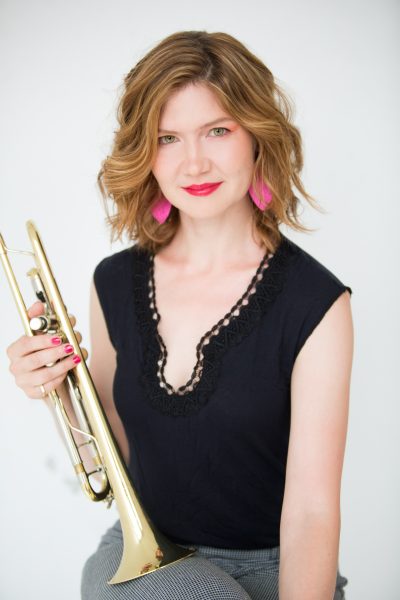 Based in NYC, trumpet player Rebecca Steinberg has a career marked by her warm, inviting sound and stylistic versatility. You can find Rebecca in the pit of New York City’s many theater productions, performing alongside her brass sextet Calliope Brass, and teaching music both privately and in the classroom.

Often heard in staged productions across the tristate area, Rebecca has recently held the trumpet chairs at Paper Mill Playhouse’s Jolly Holiday and City Center Encores! Off-Center production of Stephen Sondheim’s Road Show. Rebecca regularly appears with the National Yiddish Theatre Folksbiene (NYTF) and has appeared in their production of Fiddler on the Roof in Yiddish—performing on its 2018 cast album (Warner Music Group) and as a substitute during its 2019-20 Off-Broadway run at Stage 42. With NYTF, she held chairs in the recent off-Broadway production of The Sorceress and in the theatre’s two-year Drama Desk nominated production of The Golden Bride. Additional recent theater highlights include substitute appearances in Off-Broadway productions Alice by Heart and The Unsinkable Molly Brown.

Rebecca has shared stages with singer Kimberley Locke (American Idol) as part of funk band T.O.P. Queens, and with award winning singer-songwriter Sophie Auster. While studying at Manhattan School of Music, she developed a love for klezmer music, and founded Manhattan Klezmer Band, and has also performed with Tsibele. Television credits include Adele at Radio City Music Hall, The Late Show with Stephen Colbert (appearing with the Patriot Brass Ensemble) and on-screen in the Emmy-winning television series Mozart in the Jungle (orchestra member throughout seasons 2 and 4).

Rebecca’s most passionate and impactful work is with Calliope Brass, a quintet who collaborates with the world’s most prominent creatives to build evocative, story-driven concert experiences. The ensemble’s large-scale projects include the film-performance hybrid “Portraits of the Underdog”, designed in collaboration with composers David Maslanka and David Sampson; as well as the educational initiative “What’s Your Story?”, a collaboration with artistic minds from Hamilton and Sesame Street. Rebecca won the 2018 Liz Swados Inspiration Grant, an annual award honoring influential female music educators in New York City, on behalf of Calliope Brass. Calliope’s debut album, Rose Strewn Course, released in July of 2020. In addition to playing the trumpet with Calliope Brass, Rebecca also serves as Executive Director for the 501c3 organization.

Rebecca regularly appears with a collection of the New York City area’s most interesting orchestral and contemporary ensembles including Washington Heights Chamber Orchestra, Symphony of Westchester, The Orchestra Now, Metropolis Ensemble, Mimesis Ensemble, Contemporaneous, String Orchestra of Brooklyn, Norwalk Symphony, among others. She has performed as a soloist with The Chelsea Symphony and Torrington Symphony.

Rebecca Steinberg studied at Manhattan School of Music with Thomas Smith and Vincent Penzarella. Rebecca is a highly sought after educator in the New York City area, and currently serves as faculty member at the Dwight Englewood School and as director of the elementary band program at PS343. Since 2010, she has maintained her own private studio—former students of Rebecca have gone on to attend Interlochen Arts Academy, Laguardia High School, Frank Sinatra High School, and InterSchool Orchestras of NY, among other elite programs.

She is based in New York City, where she lives with her husband Owen and dog Marlon. An avid runner, she has run eight marathons and the Empire State Building Run-up.