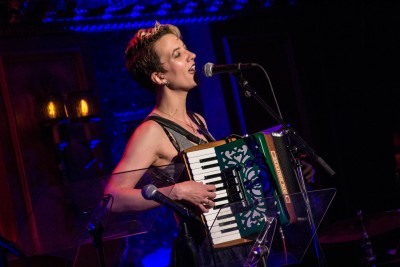 Pearl Rhein is an NYC-based actor, singer-songwriter, multi-instrumental musician, and composer. She appeared on Broadway as an actor-musician in the original cast of “Natasha, Pierre, and the Great Comet of 1812", and can be heard singing and playing viola on the Original Broadway Cast Recording. Pearl gigs often as an instrumentalist on violin/fiddle, viola, accordion, piano, guitar, mandolin, banjo and most recently electric bass & djembe. She performs regularly with The Musical Theatre Factory, Apartment Sessions, Necromancers of the Public Domain and The Bushwick Book Club. Pearl is also a proud member of Ring of Keys, a national network of queer women, trans, and gender non-conforming artists working on and offstage in musical theatre.

Pearl wrote music & lyrics for "The Persephone Project", a YA folk musical with book by Larissa Lury. The piece was developed by New Georges and Ma-Yi Theatre. Pearl is currently working with various collaborators on a post-apocalyptic zombie folk-rock musical, an adaptation of The Inferno, an educational solo show about women in S.T.E.M. and a concert musical about the history of Radium (these are all separate shows...so far).