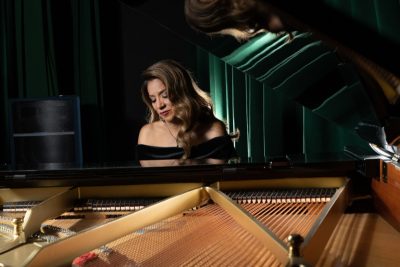 Tish Diaz is an accomplished pianist and keyboard player whose career has been a musical journey through many genres - classical, rock and roll, hiphop, jazz, country, gospel choirs and Broadway orchestra pits. Tish played keyboards and sang background vocals for the hit Broadway show, "Jersey Boys,” during its successful eight-year residency in Las Vegas. She also performed as a member of Meat Loaf’s band during the first run of “RockTellz and Cocktellz” at Las Vegas’ Planet Hollywood, and has recently been performing with “Bat: A Meat Loaf Celebration, with Meat Loaf’s official band “The Neverland Express” and featuring American Idol winner Caleb Johnson on lead vocals. Other artists she’s had the pleasure of working with are Grammy winners Thelma Houston, Sarah Dash (LaBelle) and Huey Lewis, Francine Reed from “Lyle Lovett’s Large Band,” Tony-award winner Liliane Montivecchi, and Grammy-nominated country band “Wild Rose.” Tish also played keyboards and was the keyboard programmer for legendary crooner Andy Williams at his Moon River Theater in Branson, Missouri and on tour throughout the United States, the UK and Asia. In addition to Andy, she performed with Glen Campbell, Robert Goulet, Pat and Debby Boone, Phyllis Diller, and the amazing ventriloquist Shari Lewis. She was also the house bandleader and contributed arrangements to “Las Vegas Celebrates the Music of Michael Jackson,” produced by Erich Bergen of “Jersey Boys” and “Madame Secretary.” She has been an accompanist for the studios of Los Angeles vocal coaches Seth Riggs and mezzo-soprano Mara Baygulova, and also was the accompanist for master classes held by Cleo Laine and Placido Domingo.

Tish has been involved as a coach and musical director for the Positively Arts Foundation, a performing workshop for grade school and high school students in Las Vegas. She was the bandleader for the Summer Sing-Along series, a community outreach program sponsored by the Los Angeles Music Center and Disney Hall’s Keck Amphitheater. She also enjoys being a side musician, accompanist, composer and co-songwriter for the Composer/Songwriter Showcase, a monthly event at the Smith Center that presents original music written and performed by cast members and musicians from the various shows in Las Vegas.

Tish earned her Bachelor’s degree in piano at the University of Southern California (USC) in Los Angeles, and is an active member of the USC Latino Alumni Association, as well as a recipient of an Arts Grant from the Hispanic Women's Council of Los Angeles.