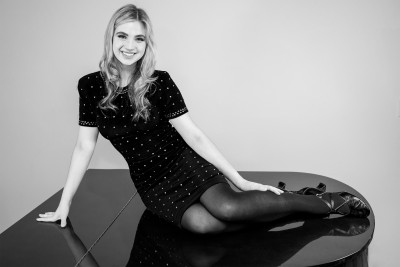 Oliviana Marie is a singer, dancer, actress, composer, lyricist, librettist, trumpeter, pianist, and conductor, currently studying composition at USC's Thornton School of Music. She’s a 2021 YoungArts and Grammy Camp winner in the singer-songwriter category, a U.S. Presidential Scholar in the Arts finalist and a proud member of ASCAP.

Oliviana has written the book, music and lyrics to four award-winning musicals! Her first musical “The Middle of Nowhere” was mentored by Stephen Schwartz and performed at the Wallis Annenberg Center for the Performing Arts in Beverly Hills, CA. Her second musical "Mr. Steiner's Masterpiece" was one of twelve winners and the only musical in the 27th Annual Young Playwrights Festival. Her third musical "Valentine's Day" was the winner of the Foundation for New American Musicals' ShowSearch competition and performed at UCLA in October of 2019. Her most recent musical, "Corona's Cabaret: An Act of Destruction" won the Audience Choice Award for Playbill’s first ever Virtual Theatre Festival Live. https://vtf.live/coronas-cabaret/.

Oliviana is a proud member of the LA Phil's Composer Fellowship Program and her piece "Ballet d'Isolment Covid" was recorded by Boston's HUB New Music Ensemble and premiered with the Los Angeles Ballet Academy in June of 2021. https://www.laphil.com/musicdb/artists/7881/oliviana-marie

Recent projects include composing the score for Lilly Urban's AFI dark comedy short “Are We Dead Yet?”, two choral pieces commissioned by the Pasadena Chorale (Jeffrey Bernstein, Director) as part of their "Listening to the Future” program and a new orchestral work for the Salastina’s Sounds Promising Young Composers Program(Derrick Skye, Director).

As a performer, Oliviana's appeared in productions at The Hollywood Fringe Festival, The Blank Theatre’s Young Playwrights Festival, The Pasadena Playhouse, Theatre West, and the Broad Theatre. A two-time winner of Michael Feinstein’s Great American Songbook Academy, Oliviana's sung in multiple cabarets including Feinstein’s 54 Below(NY), The Gardenia, Vitello’s and The Federal (LA). She’s appeared in the films "The Woodsman," “Stealth," "Beyond The Lights," and was a singing sunflower on the TV-show" Mike & Molly." As a session singer and voice-over artist, Oliviana has recorded in not only English, but also Spanish, Italian, Russian and Japanese. You can hear her child-like voice in the end credits for the 2014 Japanese cult horror film "Kamisamai no Iutoori" (As the Gods Will).