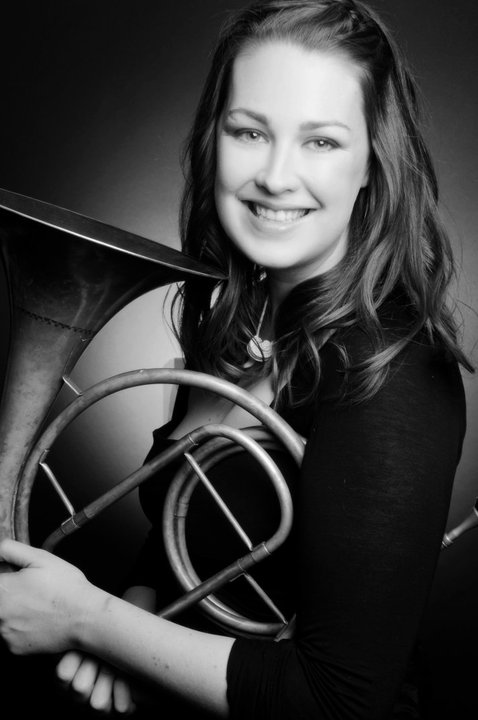 Meredith Moore is an international musician with a diverse and prolific career as a horn player, remote session musician, composer, and music educator in Brooklyn, NY.

As a soloist, Meredith has performed Richard Strauss's Horn Concerto no. 1 with the Helios Chamber Orchestra and was the winner of the 2007 International Horn Society Northeast Concerto Competition. Meredith has given solo recitals at The Cell (NYC), Spectrum (NYC), ShapeShifter Lab (Brooklyn), and at the 2016 IHS Symposium in Ithaca, NY, all of which included commissioned pieces for the horn and natural horn.

A specialist on the Classical and Baroque natural horns, Meredith has performed with the Orchestra of the Age of Enlightenment, Classical Opera Company, The Amadè Players, Norwegian Wind Ensemble (as guest principal), and numerous times as a soloist in Bach’s B Minor Mass. She has also appeared as a soloist with the Amadè Players performing Mozart's Horn Concerto no.2 K.417. From 2010-to 2011 Meredith was a fellow with the Orchestra of the Age of Enlightenment after which she became the founder and director of Evolution, a period instrument chamber ensemble. With Evolution, Meredith recorded Mozart’s Horn Quintet and gave recitals at the King’s Place (London) and the Brighton Early Music Festival along with numerous educational workshops across the UK.

Meredith’s discography includes Prokofiev’s Romeo and Juliet with Valery Gergiev and Der Freischutz with Sir Colin Davis on the LSO Live label. She has also recorded for Naxos, Chandos Records, and the BBC Music Magazine Collection. Meredith can be heard on the soundtracks to Thor (2011) and Brave (2012), on the song Learn Me Right with the band Mumford and Sons and on the 2012 UK Christmas no.1 single He Ain’t Heavy. Meredith's freelance work in New York City includes performing in the Broadway Shows Phantom of the Opera, The Lion King, and The King and I. In 2015 she was part of Josh Groban's Stages Tour.

As a remote session musician, Meredith was a featured soloist for the BBC documentary “Four Hours At the Capitol” (2021), the podcast Beyond the Belt: Tales from the Outer Rim, as well as with the UK rock band Suede. She has also arranged horn parts for dozens of tracks for the Pop, Rock, Indie, Folk, and Hip-Hop genres. Meredith has also been featured on numerous media soundtracks and contemporary classical works.

Born and raised in Connecticut, Meredith emigrated to the UK in 2007 for studies at the Guildhall School of Music and Drama and the Royal Academy of Music and ended up living and working in the UK for another 8 years. She currently resides in Park Slope Brooklyn where she freelances, teaches music lessons, writes music, and is the Music Director for the composer’s group Otonal.