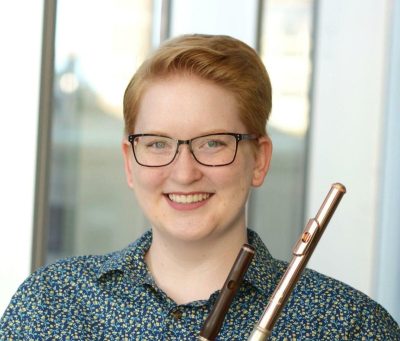 I have loved playing different woodwinds in various pit orchestras both on and off campus. I’ve played flute and piccolo for The Addams Family, Spelling Bee, Wizard of Oz, and Guys and Dolls; I’ve played flute, piccolo, and clarinet for Camelot; and I’ve played flute, clarinet, and alto saxophone for Brief Encounter. I’ve also had the incredible privilege of conducting two musicals: My conducting debut occured in November of 2018 where I was called 24 hours before showtime to conduct four sold-out performances of Spring Awakening after their conductor had a last-minute conflict. I also had the much less stressful opportunity to be the conductor and co-Music Director for Legally Blonde in the Fall of 2019.

As for classical music, I was the co-Principal flutist of the Columbia University Orchestra under Jeffrey Milarsky, with which I performed pieces including Brahms’ '3rd Symphony', Prokofiev’s 'Romeo and Juliet Suite', and Mahler’s '9th Symphony'. I was involved in contemporary chamber ensembles for three years, performing pieces such as Crumb’s 'Vox Balaenae' and Kalevi Aho’s 'Quintet for Flute, Oboe, and String Trio' at venues including Lincoln Center’s Rose Studio, Carnegie Hall’s Weill Recital Hall, and Columbia University’s Italian Academy.

Outside of music, I have worked as a theater technician for the Glicker-Milstein Theatre as well as an Admissions Representative for Barnard College’s Office of Admissions. When I’m not practicing or performing, you’ll find me listening to showtunes, playing Scrabble, or doing overly-complicated nail art.