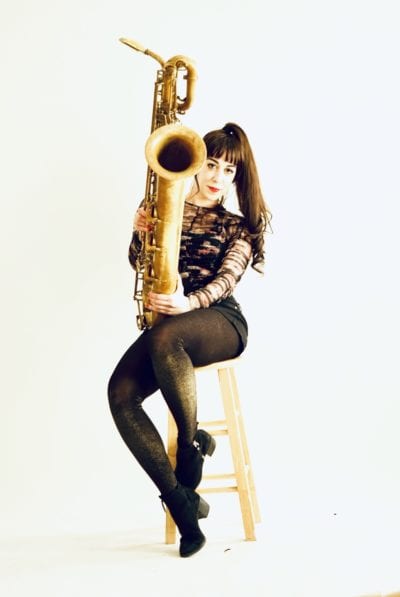 Marybeth Kern, (@Kerrnie), is a multi-woodwind instrumentalist and composer from New Jersey who has a driving passion for film scores, pop music, and jazz. Her active music career has allowed her to tour and perform at various venues throughout the country including Carnegie Hall, Lincoln Center, The Nokia Theatre, The Kennedy Center, and The American Music Theatre.  Marybeth has recorded for TV Networks such as Lifetime, Pivot, and YouTube Original Specials. Her compositions, arrangements, and recordings were used on both seasons of the Emmy award-winning series HitRECord On TV.

Marybeth is also featured in the national LG V20 commercial Everyday, Spectacular, playing baritone sax and clarinet. She is a current member of  The New York Jazzharmonic and recently appeared in Band Together with Logic which premiered at SXSW in 2019. In 2019 she became a Roland Artist, and a Featured Audio Curator for Joseph Gordon-Levitt’s collaborative platform, HitRECord.

Marybeth’s musical inspiration comes from composers and musicians like Thomas Newman, James Newton Howard, Alan Sylvestri, Dan Higgins, Cannonball Adderley, and David Sanborn. Her teachers and mentors include Broadway musicians Allen Won and Adam Kolker, as well as the legendary LA studio recording artist Dan Higgins. Marybeth remains the first and only student of David Sanborn, the most recorded and imitated saxophonist of all time.

Due to her training across many genres, Marybeth has had the opportunity to perform in a variety of musical settings. For the past two season’s Marybeth played Reed III for the Broadway National Tour of Dr. Seuss’ How The Grinch Stole Christmas! The Musical. She has toured Nationally and Internationally with Cirque Productions, played for Big Apple Circus at Lincoln Center, Central Park Summer Stage Series, The New York Jazzharmonic, The Sundance Film Festival, SONY promotional ads, and others.

TV and Movies: Buffaloed (with Matthew Margeson), Stalked by My Doctor: The Patients Revenge, Band Together with Logic,  HitRECord on TV Seasons 1 and 2, La Llave de mi Corazón,