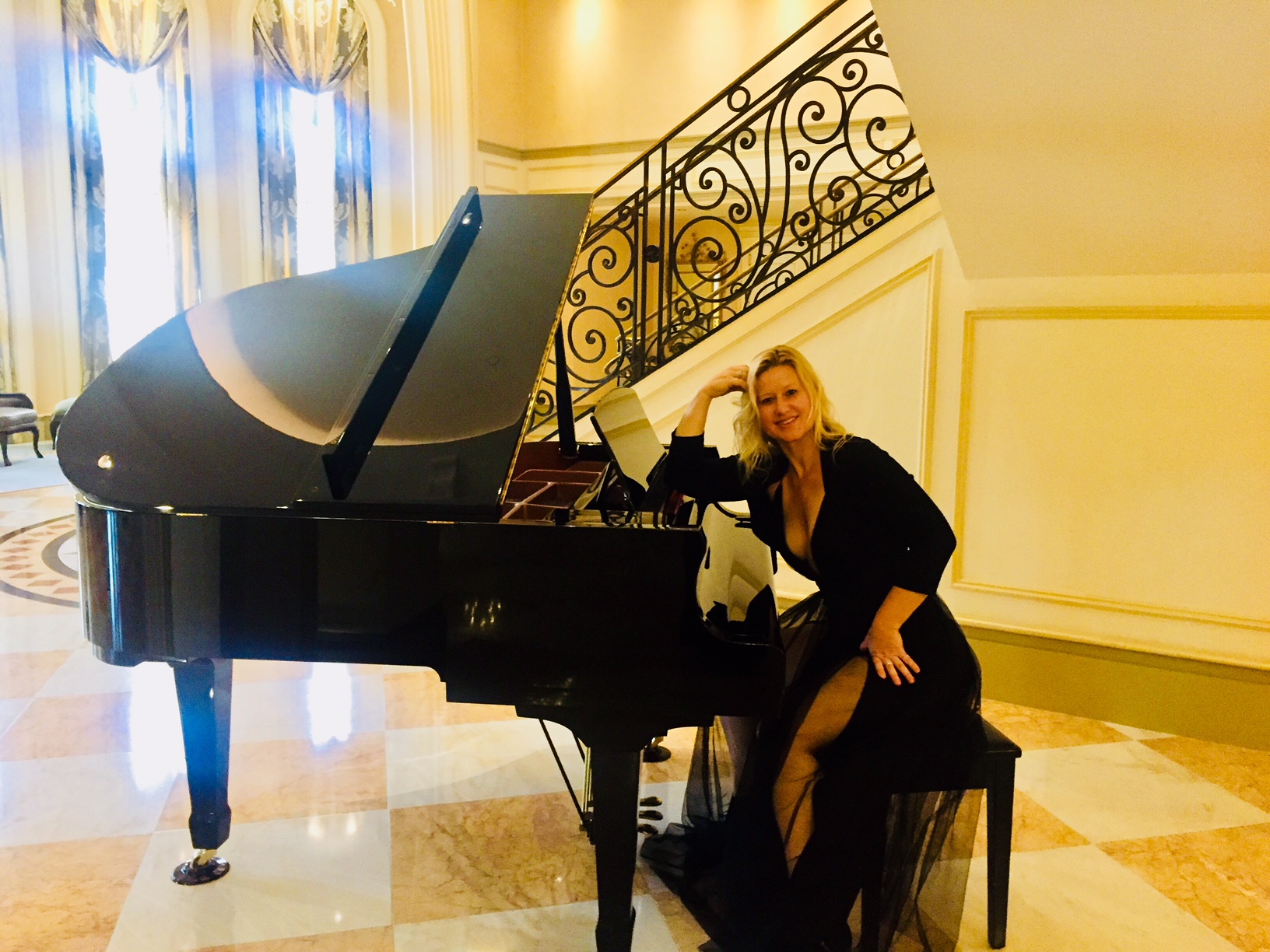 NYC’s composer, singer, songwriter, music director, conductor, oboist, pianist, and educator Mary Gatchell, grew up in New Hampshire, and is a graduate of NYU with a Bachelors degree in Jazz Theory and Composition. Mary earned her Masters degree at NYU in Jazz Piano Performance in January 2020.
Mary has performed in NYC venues such as the Blue Note, Carnegie Hall, Avery Fisher Hall, Birdland, Knitting Factory, Bitter End, Cutting Room, Rockwood Music Hall, Groove, CBGB’s, and Broadway theatres such as the Lamb’s Theatre, Minskoff Theatre, Brooks Atkinson Theatre, and Barrymore Theatre. She has brought her music to Europe and Africa. She has performed at Brooklyn’s Barclays Center and Newark’s Prudential Center with legendary rock band The Rolling Stones for their 50th Anniversary tour with chamber choir Ghostlight (www.ghostlightchorus.com), of which she’s been a member since 2010.
As a bandleader and prolific songwriter, Mary has released 8 albums and several singles of her original music produced with top musicians in NYC. Her latest, Camino Real, was produced by celebrated jazz/R&B keyboardist, A.T.N. Stadwijk, Real Fantasy, produced by R&B producer/gospel artist, Leon Lacey and gospel/jazz/R&B drummer, Nathaniel Townsley, Saturn Return produced with Santana drummer, Rodney Holmes, and Indigo Rose, produced by acclaimed singer/songwriter/guitarist for Carly Simon, Peter Calo. Mary self-produced her Christmas album, Merry Christmas, Love Mary, live album, Mary Gatchell Live, jazz album, Syretha featuring jazz pianist great, Jim McNeely, and a children’s album, Music With Mary, featuring little kids from all over! They all can be found at www.marygatchell.com and are available on all streaming platforms.
Growing up in a small town in New Hampshire, Mary gained a strong foundation from her parents in musical theatre, jazz and classical music, singing and playing the piano and oboe. Her mother, Elaine Gatchell, is the founder, executive director, producer, and choreographer at Leddy Center for the Performing Arts, www.leddycenter.org, and music teacher and church choir director. Her father, J. Bruce Gatchell is the conductor/artistic director of the Strafford Wind Symphony, music director, piano tuner, band director and educator and trombonist. Both having served their community for over 50 years!
In connection with the Worldwide Orphans Foundation (www.wwo.org) Mary has traveled to Ethiopia where she implemented a sustainable music curriculum for HIV-infected and impoverished children, and to Bulgaria to teach music to orphans with special needs. Mary is also the co-founder and artistic director of Italian chamber music festival Siena Summer Music (www.sienasummermusic.org) held in beautiful Siena, Italy. Mary was the music minister, organist and choir director at Teaneck United Methodist Church in New Jersey from 2011-2017. As a singer, she is a member of New York based band Uptown Sounds, and New Orleans funk bank, Strangeland.
In 2018, Mary was the pianist for Andrew Lloyd Webber’s Jesus Christ Superstar starring John Legend, Sara Bareilles, and Alice Cooper, which aired Easter Sunday live on NBC and re-aired on Easter 2020. Starting in 2019, she became a sub Conductor and pianist on stage on Broadway for Sara Bareilles’ show, Waitress. Mary is currently the rehearsal pianist and sub Conductor for the new Broadway hit, Six The Musical, nominated for 8 Tony Awards and winning 2.
Mary is a faculty member at Nyack College in NYC. Having started in 2015, she has taught ear training, music theory, acting, and conducting and is Co-Director of the Chorale. She was the Co-Music Director and Choreographer of the musical productions at Nyack, West Side Story, In the Heights, The Wiz, Jesus Christ Superstar. She is the choreographer for Dreamgirls, 2021, at Nyack.
Mary recently released an album, the first of three volumes, in April 2022 entitled, “Hymns From Home Vol.1”. It is a collection of beloved traditional hymns and spirituals. These pieces were recorded as a gift for her hometown church in Epping, NH, Epping Community Church over the span of 44 weeks during the pandemic 2020-2021. The songs have been remixed and mastered by engineer, Gordon Bahary of Electric Kingdom Studies. Volume 2 came out in the summer of 2022 and volume 3 will come out in the fall!
Mary is also currently working on her 11th album, Destiny, setting music to a collection of love poems from 8th century Rabia of Basra, Rumi, Hafiz, St. Catherine of Siena, and Farouk Henry of NYC. She is also writing an opera to Dante’s The Divine Comedy.
www.marygatchell.com