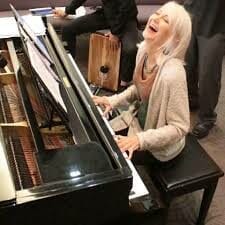 Mary was a featured pianist and arranger on American Idol Seasons 10 and 11, and can be seen performing on many PBS Doo Wop specials. She orchestrated a musical version of the film The Flunky starring Jimmy Van Patten and Deborah Gibson as well as orchestrating the musical BoomerMania!

An award winning songwriter, Mary’s compositions have been performed and recorded by Sergio Mendes, Glenn Yarbrough, Helen Reddy, Little Anthony and the Imperials, Deniece Williams, and Cheryl Barnes. She has composed music for the TV series Matlock and for numerous feature films.

Musical Director: Reprise Theatre Company’s Broadway Under the Stars at the Ford Theatre, A Grand Night for Singing and Nothin’ Like a Dame at The El Portal Theatre, Musical Theatre Guild's production High Spirits, Forever Plaid at the San Gabriel Mission Playhouse, Santa Clarita Valley Theatre Project’s production The World Goes ‘Round, The Rose Bowl Queens both directed by Kay Cole, the first annual Hope for the Holidays at the Key Club for APLA, the 2008 S.T.A.G.E. Benefit, Blame it on Bacharach, the 2009 The Brothers Gershwin S.T.A.G.E. Benefit, the 2010 S.T.A.G.E. benefit Original Cast and the REAF Help is on the Way XIV Benefit, all directed by David Galligan.

Associate Music Director: The Grinch That Stole Christmas at the Pantages Theatre, and Reprise! productions of Company and Kismet.