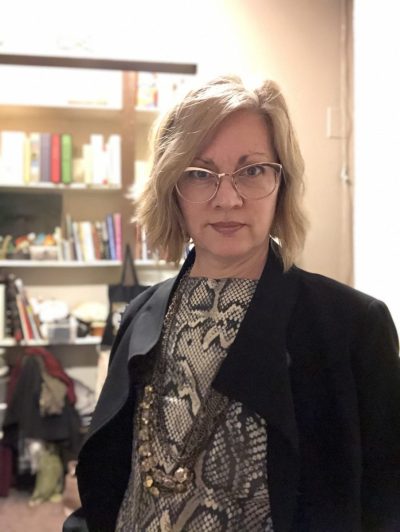 Marianna Mott Newirth is a librettist, playwright and producer of opera. An Emmy- nominated maker of cultural documentaries, she now creates works of opera and musical drama in addition to straight theatre & video.

Her performed operatic works include; ‘Transmission II’, a collaboration with composer, Rabbi Bronwen Mullin at the Artist’s Beit Midrash of Town & Village Synagogue in New York City; ‘Musical Tales Concerto and Alexa the Dyslexic Angel’ with composer, Peter Michael von der Nahmer, at The Grand in New Ulm, MN; ‘Blue Hum’ with co-writer, Anita Prestidge and composer von der Nahmer at Tapestry Opera in Toronto; ‘Growing Young’ with the Brooklyn Arts Council SU CASA program team lead by von der Nahmer; ‘Where Is The Stillness’ recorded in Munich for the 250 Piano Pieces for Beethoven project. She’s served as librettist for ‘ Nia Wa Ja Shu/Be A Hero: A Dramatic Choral Cantata for Change’ with creative team von der Nahmer/Prestidge to be performed by Camerloher youth choir and symphony in Munich. Marianna wrote the libretto for ‘Transportation Transformation’ a 10 minute opera created in 24 hours, commissioned by the New York Opera Alliance and WQXR Public Radio at The Jerome L Greene Space. Her straight theatrical pieces, ‘Bachelor’s Agreement’ and ‘Correspondence Theory’ were produced in New York City in 2018; with ‘Interabled’ premiered at Queens Theatre For All Festival in May 2019.

Marianna served as Dramaturge for ‘Princess Maleine ’ with the creative team Whitney George & Bea Goodwin which premiered August 2019 with dell'Arte Opera Ensemble. She now works with dell'Arte as their Artistic Administrator. Her current operatic work ‘When Falling...Dive’ is an illustrated opera in post production. ‘The Ayes Have It’ a chamber opera on the birth of the women's movement and the drafting of the Declaration of Sentiments is in early development.

Marianna is a member of the Dramatist’s Guild, Opera America and New York Opera Alliance where she currently serves on the Board. She lives in New York City with her husband, photographer Scott Newirth.