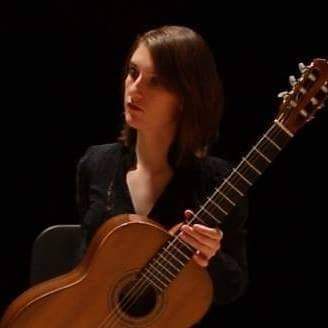 American guitarist & composer Liz Hogg has been described as “writing independent music that doesn’t reflect the trends,” “uniquely her own,” (I Heart Noise) and “playing with a more distinctive and original approach that includes quickly-strummed chords, chiming arpeggios, and rapid-fire picking” (Geoff Cabin). Her playing has been further characterized as “strong, precise, and powerful” (Bushwick Music Daily), “radiating in its own light” (New Noise Magazine) and “[displaying a] confrontational spectrum of emotions” (Music & Riots).
As a classical guitarist and performer of her own mostly-electric guitar music, Hogg has toured eleven countries playing numerous festivals and concert halls. She has won awards including the Mannes School of Music Dean’s Award as well the Maurice Kagan Memorial Scholarship Award for Excellence in an Orchestral Instrument (first guitarist recipient), and was a Fulbright-García Robles Scholarship semi-finalist. Hogg was also the first American to win a fellowship for performance and study at the Lanciano International Guitar Festival in Italy and has received grants from the Peter M Gross fund and Queens College.
Since 2014, Hogg’s performance schedule has taken her across Europe and North America including Carnegie Hall, Lincoln Center, and Brookfield Place in her hometown, as well as Portugal’s Casa da Música and Mexico’s Tlaqná Concert Hall. She has performed live at several radio stations including WFMU, WNYC and WTJU and has been a featured artist at festivals Internacional Camerata 21, CMJ and New Sounds Live. In 2018, Hogg released her first S/T solo album on Mouca Records, in which she recorded and performed all the instruments, as well as completed the artwork and engineering. In 2019, she will tour Japan and the Northeast/Canada to support the album, as well as record her debut classical guitar album for a Fall release via Athena Records.
Hogg has acquired a dynamic range of performing experience since 2009, from playing in Broadway shows to premiering solo classical and electric guitar works to early music ensembles. She has recorded and performed on a variety of stringed instruments beyond guitar including mandolin, lute, banjo, sitar, Hawaiian guitar, 5-string bass, theorbo and tiple, including classical guitar and bass in musical The Stranger From Seville, theorbo and guitar in Mannes’ production of L’Orfeo, and banjo, classical, steel string and Hawaiian guitar at Kupferberg Center for the Arts’ production of The Threepenny Opera. Each year, Hogg selects and performs a new piece for the Mise-En Music Festival, and has recently premiered pieces by David Lang, Robert Martin, Jakub Polaczyk, Linda Buckley, Amelia Kaplan and Ivan Vukosavljević.
As a composer and performer/singer of her own music and in various groups, Hogg has recorded eight full-length albums, five eps, and four singles, self-released and released by Mouca, Acuarela, Marsyas and Don Giovanni Records. Hogg’s recordings and performances have garnered reviews from The New York Times, NME and Big Takeover, as well as a video premiere on MTV for her single “Drifters”.
After studying with William Anderson and graduating from Aaron Copland School of Music at Queens College with a Bachelor of Music in guitar performance with honors, Hogg went on to receive a Master of Music in guitar performance at Mannes School of Music as a student of Michael Newman. She currently serves on the faculty of several schools throughout NYC.