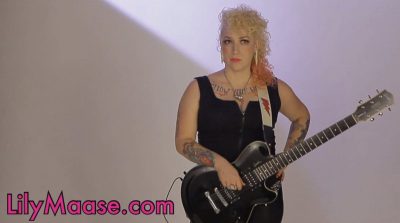 Lily Maase is a guitarist, composer and educator based in Los Angeles and New York. She is the daughter of legendary New Mexican session guitarist and educator Steve Maase, holds a degree in jazz guitar performance from the University of North Texas, and was a 2017 composer-in-residence at Spark & Echo Arts.

Lily has contributed to Premier Guitar Magazine, Guitar World and Guitar World’s Acoustic Nation, who recently lauded her as a “master guitar teacher.”

She the co-founder and sole proprietor of Guitar Dad Publications, publisher of the acclaimed theory handbook for guitarists “Music Theory You Can Use”.

Lily is the lead guitarist, musical director and bandleader with the Rocket Queens all-female tribute to Guns N Roses and the Suite Unraveling (Tzadik), whose work was lauded by John Zorn as “a serious effort by a talented young composer”. She is the 2010 and 2018 champion of the Shred For Your Life guitar competition and has performed with Natalie Douglas, Amy Jo Jackson, Bria Skonberg, Alicia Jo Rabins, Christina Bianco and Gato Loco.

Lily has presented composition and guitar workshops at numerous universities across the United States and sits on the faculty at the Banff Centre’s International Workshop for Jazz and Creative Music. She is currently a teaching fellow in the guitar, theory and experimental pop departments at California Institute of the Arts. She is endorsed by Godin Guitars.