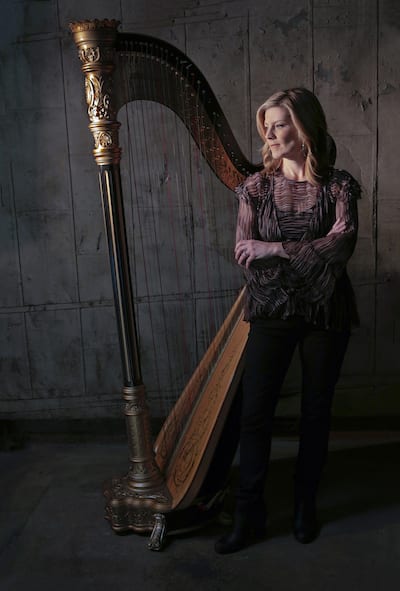 KIRSTEN AGRESTA COPELY has charmed audiences internationally since she began study of the harp at the age of five. By the time she was fourteen, she was soloist on a full tour of the British Isles and has since performed extensively as a solo artist throughout the United States, Europe, South America, Israel, Japan, and the South Pacific. Known for her passionate performances and versatility, Kirsten commands a wide range of genres from classical to hip hop. She has been awarded top international and national honors, including the Bronze Medal in the prestigious 1989 USA International Harp Competition. Kirsten debuted as concerto soloist at Lincoln Center (David Geffen Hall) and Carnegie Hall, where she has also performed numerous solo recitals. She has soloed internationally in esteemed venues including: National Concert Hall in Dublin, Auditorio Santa Úrsula in Lima, Peru, and MuziekGebouwaan'tij Concert Hall in Amsterdam. Kirsten performs as Principal Harpist with The New York Pops, Mostly Mozart Festival Orchestra at Lincoln Center, and regularly with the Nashville Symphony.

She has played harp and keyboards in numerous NY Broadway productions, including Beauty and the Beast, The King and I, On A Clear Day, Follies, Cinderella, Carousel, and held chairs on The Pirate Queen (principal harp) and Wonderland (keyboard 3).

In the studio, Kirsten was featured on Erykah Badu's album, New Amerykah Part Two: Return of the Ankh ("Incense") and can be heard on numerous albums with artists such as Lionel Richie, Alison Krauss, Bonobo, Norwegian soprano Sissel, and Jamie Lidell. She has played on video game, TV and movie soundtracks, including Outlander (Season 3), Star Wars: The Old Republic, Night at the Museum: Battle of the Smithsonian, The Tempest, Sex and the City 2, Disney's The Music of Pixar Live!, My Little Pony: The Movie and the JD Salinger biopic Rebel in the Rye. Most recently, she played on the new Evanescence album, Synthesis, reuniting with her former harp student, lead singer Amy Lee. Kirsten is featured in the video documentary Behind Synthesis, Episode 3.

Performance highlights include the World Premiere of Constantinides: Concerto for Flute & Harp at Lincoln Center (David Geffen Hall), the MET Gala with musical guest Frank Ocean, "4 Intimate Nights with Beyoncé" at New York's Roseland Ballroom, with Jay Z at Carnegie Hall, benefiting United Way of NYC and the Shawn Carter Scholarship Foundation, and performing with multiple artists for Tony Bennett Celebrates 90: The Best is Yet to Come at Radio City Music Hall, which aired on NBC.

KIRSTEN AGRESTA COPELY studied with Nancy Allen at The Juilliard School and Distinguished Professor Susann McDonald at Indiana University. She received her Bachelor and Master of Music degrees from Indiana University, where she was awarded the Performer’s Certificate for outstanding musical performance and also served as Associate Instructor of the Harp Department from 1991-93. She is Adjunct Associate Professor of Harp at Vanderbilt University Blair School of Music, a former Affiliated Artist at Sarah Lawrence College in Bronxville, NY, and teaches private harp & piano lessons from her studio in Nashville, TN and NYC. Kirsten is a member of the World Harp Congress Board of Directors, Vice President of the American Harp Society Nashville Chapter, a Voting Member of the Grammy Recording Academy (NARAS), and a member of ASCAP.