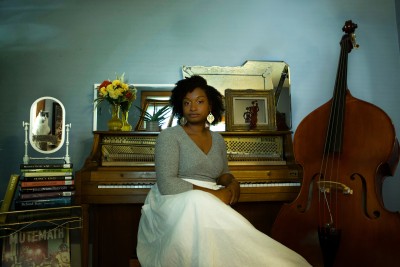 Through her love for music, Davis has cemented herself as an impassioned teacher and mentor to youths of all ages, working with organizations such as the Detroit Symphony Orchestra, Girls Rock Detroit, and the Science Gallery, while focusing on the importance of music, composition, individuality, empowerment, and community. Jordyn has worked with many other young artists, held master classes, and led music-based projects to educate young people who are still discovering their love of music.

Composetheway is a genre-bending chamber ensemble led & founded by Jordyn Davis. What began as a solo singer-songwriter project created to express her ideas on recognizing the importance of self-love, reflection, & empowerment has evolved into a malleable musical experience rooted in collaborative composition & improvisation.Her debut EP entitled “Connections” was independently released in 2017. The record reflects on a collection of experiences and ideas that have helped Davis understand and refine her perspective on the ways relationships, interactions, and connections occur.

She is a prolific composer, with a new single out, titled “Night Off”, available via all the major music distribution means. In May 2023, the New York Philharmonic Young People’s Concert will feature the world premiere of one of her works at their New Voices concert series. The New York Philharmonic is partnering with The Juilliard School’s Preparatory Division and American Composers Forum on a program called Composing Inclusion, a new two-year initiative designed to develop the next generation of composers, made possible by a $100,000 grant from the Sphinx Venture Fund. Jordyn is one of two composers to be featured at this first concert. Out of a competitive field, nine Black and/or Latino composers have been chosen to develop adaptable works — which can be performed by a variety of ensembles, from professionals to students, and in various instrumental configurations — the adaptable works are developed through a series of workshops and rehearsals, engaging multiple generations and members of New York’s musical community.

Davis’s hard work, determination, and passion for her craft are what make her a unique and shining light in the music industry.