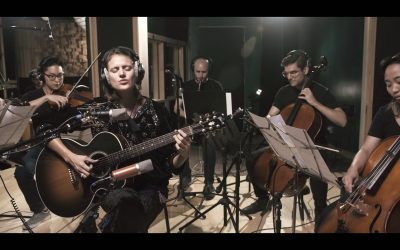 Jacinta Clusellas is a composer, singer-songwriter and guitarist based in New York City. Originally from Buenos Aires, Argentina, Jacinta brings together South American folklore, jazz and chamber music, in the context of songs influenced by poems, literature and nature from South America.

In New York City, Jacinta has performed at SIX on Broadway as a guitarist, at the David Rubenstein Atrium at Lincoln Center, Joe’s Pub, The Great Hall at Cooper Union, Americas Society/Council of the Americas, La MaMa Theatre, Le Poisson Rouge, Rockwood Music Hall, Musical Theatre Factory, The Sultan Room, Women of Color on Broadway and more. Jacinta’s debut album El Pájaro Azul was released in NYC, and published in Japan under the record label Inpartmaint Inc. Her second album is being produced by West One Music (London, UK) recorded in NYC and Buenos Aires, and will be released in the summer of 2022.

Jacinta is a Teaching Artist at the New York Philharmonic, where she develops programs and teaches for the Very Young Composers Program, and has served as a mentor and Teaching Artist at Lincoln Center’s Music Across Borders program and Passport To The Arts program. Jacinta is an Assistant Professor at Berklee College of Music in the Contemporary Writing and Production department.