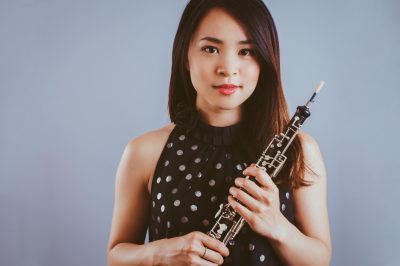 Oboist Hsuan-Fong Chen (pronounced “SHUan-fong”) has performed across the United States, Europe, and Asia, enjoying a diverse career in orchestra, Broadway, and new music. Having she is sought after for a wide range of performances that range from a guest principal appearance with the Metropolitan Opera Orchestra, sharing the stage with Rihanna at the Met Gala, and performing in the hit Broadway production of Rocktopia as its lead oboist, with an additional appearance in Wicked and Phantom of the Opera.

A seasoned orchestral player, Hsuan-Fong Chen regularly performs with Symphoria, the Talea Ensemble, the Huntsville Symphony Orchestra in Alabama, the Albany Symphony Orchestra, and the New York Philharmonic, with whom she accompanied in the orchestra’s West Coast tour. In new music, she premiered the East Coast premiere of Nico Muhly’s The Faire Starre with Trinity Wall Street’s contemporary orchestra NOVUS NY, and has performed several times with ensemble mise-en. As a soloist, she has given recitals and performed concerti with orchestras in Taiwan, Germany, and across the United States. Her album debut came in October 2019 on the Naxos label, when she recorded Beethoven’s Serenade for Winds alongside faculty from the Yale School of Music.
A native of Taiwan, Hsuan-Fong Chen holds education from The Juilliard School (B.M.), the Yale School of Music (M.M. & Artist Diploma), and the Manhattan School of Music (Orchestral Performance Diploma). A musician from age four, Hsuan-Fong was a former competitive pianist—highlights include a Carnegie Hall performance and a brief feature in the documentary “A Museum Without Walls”. She is based in New York City, where she lives with her cockapoo, Hiro.