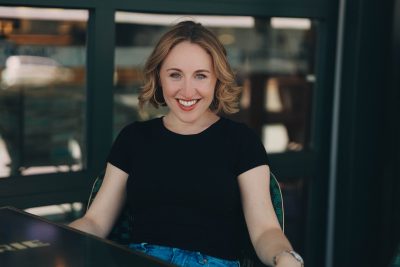 New York-born and bred soprano and librettist Heather O’Donovan is a multi-hyphenate storyteller-artist. Throughout her studies, Heather enjoyed performing roles and scenes from the core repertoire, including Cendrillon (La Fée), Monteverdi’s The Coronation of Poppea (Drusilla), and Die Zauberflöte (Papagena). An avid performer of new music theater, she has originated roles in world premieres of Andrew Lovett’s The Analysing Engine (Professor Platt) and Flannery Cunningham’s Weehawken (Elizabeth Schuyler Hamilton). She is also a frequent participant in workshops of new American operas, such as Julian Wachner’s Rev. 23 (Fury 1), and in concert premieres of new song cycles, micro-operas, and other shorter-form works. Heather also finds particular joy in delving into the more obscure gems of the classical repertoire. During the first year of her graduate studies Heather reveled in bringing physical life to the role of Lucia in Nino Rota’s rarely-performed radio opera I due timidi. Her proudest project to date remains her undergraduate senior thesis, a singable English-language translation of Victor Massé’s once-immensely-popular Les Noces de Jeannette, a charming one-act which she produced and performed in chamber opera adaptation with the generous support of the Princeton University Department of Music. Heather is also an active librettist and lyricist. Deriving from a deep fascination with language and the field of translation, Heather devoted the pandemic-era shutdown (arriving on the tails of her final year of graduate studies) to a budding interest in libretto writing. She has been delighted to work alongside composer and fellow performing artist collaborators to bring nuanced characters with complex needs and desires to vivid life. Heather’s librettos have been commissioned and presented by the Manhattan School of Music’s Contemporary Opera Ensemble. Her work has also traveled to Paris’ Fondation des États-Unis. Heather graduated summa cum laude from Princeton University with a bachelor’s degree in music and received her master’s degree from the Manhattan School of Music.