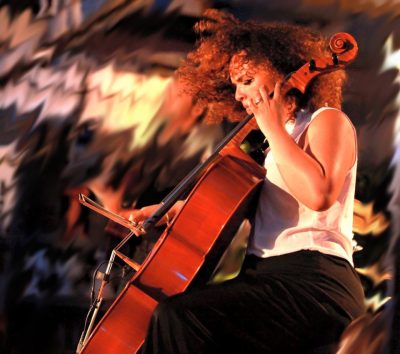 As the daughter of professional musicians, Giovanna Moraga Clayton was destined to have a life in music. “She’s going to be a cellist!”, an exclamation made by her father within hours of her birth set the path for her future. Born in Toluca Mexico and raised in Southern California, Giovanna earned a number of accolades as a young cellist. Making her orchestral solo debut at the age of 14, Giovanna has continued to solo with orchestras in the US as well as Central America as well as holding tenured positions with the Los Angeles Chamber Orchestra and the Hollywood Bowl Orchestra. Working in the Los Angeles studio scene for the last 14 years, Giovanna has played on countless movie soundtracks, records and television shows. In search of a more creatively challenging project Giovanna became a founding member of the Latin Grammy Nominated group Quattro. Touring with the group, now known as Quattrosound, has provided a new platform for her to expand her musical reach. An accomplished and respected musician in the classical world, Giovanna is quickly gaining acclaim in the Contemporary music world as a singer/songwriter. Giovanna has shared stages with many greats including Yo-Yo Ma, Pinkas Zuckerman, Daniel Hope, Bocelli, Prince, Beyonce, Adele and many more. Giovanna resides in Los Angeles with her husband, two children and dog.