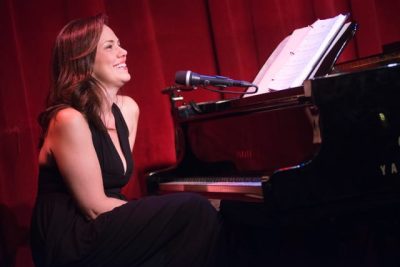 GEORGIA STITT is an award-winning composer, lyricist, music producer, pianist and activist. She has two original musicals that premiered in 2018: SNOW CHILD (commissioned by DC’s Arena Stage and directed by Molly Smith), and BIG RED SUN (at 11th Hour Theater in Philadelphia, NAMT 2010). Her young adult musical, SAMANTHA SPADE, ACE DETECTIVE, won “Outstanding New Musical” from the National Youth Theatre in 2014 and is now licensed by The Musical Company. Other shows include THE BIG BOOM (with Hunter Foster), BLIND SPOT (with Chisa Hutchinson), THE WATER (winner of the 2008 ANMT Search for New Voices in American Musical Theater), and MOSAIC (commissioned for Inner Voices, starring Heidi Blickenstaff). Georgia has released four albums of her music: "A Quiet Revolution," "This Ordinary Thursday," "Alphabet City Cycle" (featuring Tony-nominated actress Kate Baldwin), and "My Lifelong Love," and she is currently at work on a collection of theatrical art songs and an as-yet-untitled oratorio. Her choral piece "with hope and virtue" (using text from President Obama's 2009 inauguration speech) was featured on NPR as part of Judith Clurman’s "Sing Out, Mister President" cycle, and her orchestral piece, "Waiting for Wings," co-written with husband Jason Robert Brown, was commissioned by the Cincinnati Pops Orchestra and premiered there with conductor John Morris Russell. Georgia is a member of the Council of The Dramatists Guild, The American Federation of Musicians, The Recording Academy, SAG/AFTRA, and ASCAP, and she has been on faculty at USC and Pace University. She has degrees from Vanderbilt University’s Blair School of Music and NYU’s Tisch School for the Arts. She is on the Board of Directors for The Lilly Awards Foundation and she is the Founding Director of MAESTRA, a not-for-profit organization for women theater composers, conductors, and other musicians. Other fun credits include being the music director of the recent Off-Broadway revival of SWEET CHARITY (starring Sutton Foster), music supervisor of the Anna Kendrick/Jeremy Jordan film THE LAST FIVE YEARS, writing arrangements for Tony Bennett’s 80th birthday party, serving as the vocal coach for "America’s Got Talent," and playing a nun in "The Sound of Music Live!" on NBC with Carrie Underwood and Audra McDonald.