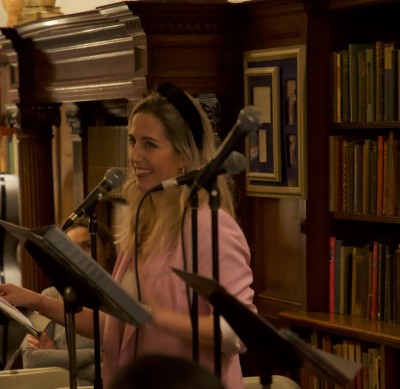 Florencia Iriondo is a true citizen of the world. Born and raised in Buenos Aires, Argentina, she's lived in New Zealand and Ireland has traveled through Asia, Central America, and Europe, and has been based in NYC since 2013.

"South," (formerly known as “Back Home”) her new, original musical about identity and belonging, is scheduled to be presented at the Underbelly (“Fleabag”, “Six, The Musical”) Edinburgh Fringe Festival 2021. An invite-only reading was presented in October 2020 at The Core Club in NYC for a select group of people. It had a two-day run in November 2020 at Arts on Site, in Downtown Manhattan, following safely-distanced guidelines. The show debuted by curation at a sold-out concert at Feinstein’s/54 Below. A staged reading was presented at The Players club in Gramercy Park. A new reading will be presented at the HB Playwrights Theatre as part of the HB Playwrights Reading Series in June 2021.

Her song-cycle “Who's Flo”, recorded in 2014 at The Cutting Room Studios, has been awarded by the Global Music Awards and the Hollywood Songwriting Contest. She has performed in NY's iconic Rockwood Music Hall, The Bitter End, Pianos and The Bowery Electric, among other venues.

She has a B.A. in Communications from Universidad Austral and has studied musical theater performance at Fundacion Julio Bocca, acting at Stella Adler Studio, filmmaking at New York Film Academy, comedy writing at Upright Citizens Brigade and is attending the BMI Lehman Engel Musical Theatre Workshop.