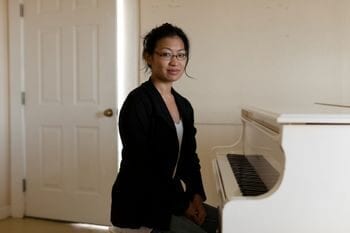 Faye Chiao is composer and performer of musical theater, opera, and concert music. Chiao has been honored with The Presser Music Award from The Presser Foundation, the Libby Larsen Prize from the International Alliance for Women in Music, and grants from The Puffin Foundation and OPERA America.

For the 2019/2020 season, Chiao is a returning New Victory Theater Labworks Artist. For the 2017/2018 season, Chiao served as Composer-In-Residence with the Boston Chamber Symphony and St. David’s Episcopal Church in Baltimore. With playwright Tasha Gordon-Solmon, Chiao is currently working on a full length musical based on the life of children's book author Dare Wright and a feminist revenge comedy. With playwright Anton Dudley, Chiao recently completed a family opera for Houston Grand Opera’s Opera to Go! and an original family musical, Baba Yaga and the Firebird, currently in development with New Victory Theater’s Labworks.

Chiao is a member of the BMI Musical Theater Workshop, participated in BMI’s Composing for the Screen Film Scoring Mentorship Program, and holds degrees from The Peabody Institute of The Johns Hopkins University.