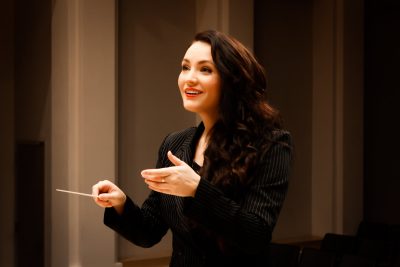 Dr. Erica Glenn holds a DMA (Choral Conducting) from ASU and an EdM from Harvard. She is a current Fulbright Scholar, unearthing the lost history of Ukraine's first female composer, Stefania Turkevych. Dr. Glenn has conducted multiple ensembles at ASU (Women's Chorus, New American Choir), Dean College, and the American International School of Utah (where she led seven award-winning choirs). In 2021, Dr. Glenn became a national finalist for the American Prize in Conducting. In 2020, she was awarded a conducting fellowship in the Cortona Sessions, was hired by DC's Kennedy Center as a virtual Music Teaching Artist, and founded VirtualChoirConductor. Dr. Glenn has performed with professional choirs across the US and Europe and has played lead roles in over a dozen musicals. As a composer, her choral works and art songs are widely commissioned, and her first opera won the international Opera-in-a-Month competition. She has written six musicals, one of which showcased at the 2014 New York Musical Festival and received a world premiere at Boston's OBERON. www.ericakyreeglenn.com