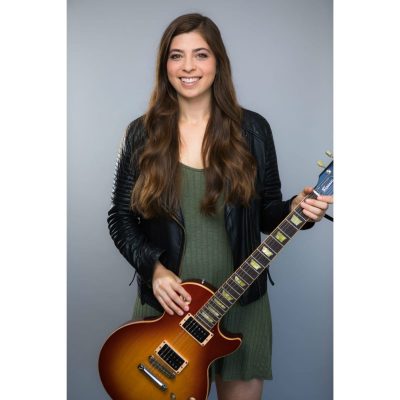 Emily Rosenfield is a session guitarist, producer, and arranger based out of Los Angeles, CA. She has played on a diverse array of projects, including Pixar's Luca, Rent: Live on FOX, TV's Good Trouble (Freeform), Wake Up by Fat Tony (Carpark Records), Darren Criss's Royalties (Quibi), and Tan Weiwei: Live at EastWest. She is a frequent collaborator with For The Record Live and has recently been seen playing guitar in their Tarantino show, one-off concert productions, and annual productions of Love Actually Live at the Wallis Annenberg Center for Performing Arts.

As an arranger and producer, she has landed music on Freeform and Disney Channel while racking up live and touring credits with For The Record, Dylan Conrique, Raveena, Melody Federer, Brooklyn & Bailey, and more. Most recently, she has collaborated with songwriter Payson Lewis, arranging and co-producing an EP for vocals, guitar, and string quartet. When not performing live, she works out of her home studio delivering guitar tracks to songwriters, producers, and composers.