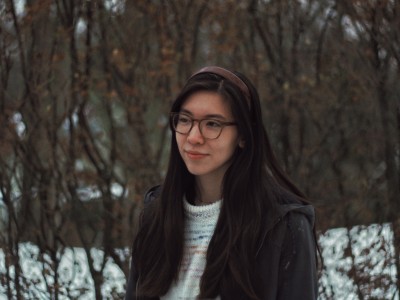 EMILY MAE HSIANG is a composer and independent musician from the New York area. Growing up, she was drawn to music in every possible way, from playing saxophone in school ensembles, to writing her own songs for open mic nights, to leading a band in her friend's garage, to even trying hand bells. In 2020, she took to Tik Tok as Emily Mae Music, posting her singer-songwriter/musical theater creations and reaching a rising 14k followers with over 400k cumulative likes in only a year's time.

In September 2021, at the age of 20, Emily released her first 11-track original musical theater score, The Incredibles: The Musical. Inspired by the Disney-Pixar hit, the concept album was recorded entirely remotely by its charismatic cast, which includes a range of brilliant performers, from beloved internet personalities to Emmy-nominated actors.

Beyond this, she has produced for other independent artists such as Brice Cloke, lent her voice to albums such as those of Public Library Commute and Couchsleepers, and composed musical theater numbers to be featured in various film and video projects...soon to be announced. She is also seen performing her original music for the Broadway World-nominated cabaret, Cabaret on the Couch. At the same time, Emily pursues her bachelor's degree in music and anthropology at Haverford College, where she specifically focuses in vocal studies and composition.

As seen in her creations, Emily brings freshness and heart to the diversifying world of musical theater via rhythmically-driven piano parts, clever melodies, and a healthy amount of dissonance. She plans to spend the rest of her life immersed in the musical theater community she loves.