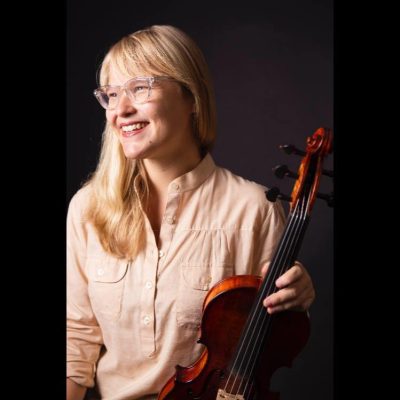 Concetta Abbate is a NYC based violinist, singer and composer. She released her first solo album entitled Falling in Time in February 2015 on Waterbug Records. The album was written for mixed ensemble and included original art songs inspired by natural science, folk tales, poetry and everyday objects and sounds. Her upcoming 2020 album titled Mirror Touch is written for solo 5 string violin and voice.

She was a visiting composer in residence at TAKT gallery in Berlin both in 2014 and 2016 and a composer in residence at the Rauschenberg Foundation in 2019. In 2018 she co-composed a dance composition for the Wendy Osserman Dance Company and in 2016 was commissioned to write a piece for Arch Contemporary Ballet. In 2020 she was invited to present her original work, Mirror Touch, at the department of Musicology at the University of Vienna.

As a performer she regularly plays violin and sings with a variety of ensembles in the New York area. Concetta is most known for her collaborative work with poet Cornelius Eady (Kattywompus Press), musical instrument builder Skip La Plante, photographer Vera Comploj and Latin music band Inti and the Moon (Intiluna Records).

Concetta is the musical director of a music education non-profit called "Teacup Music". She holds an undergraduate degree from Smith College and a masters degree in Music and Music Education from Columbia University. She has received grants from the Rauschenberg Foundation, Brooklyn Arts Council, TAKT Berlin, Department of Cultural Affairs, the Charles Mayer Foundation as well as The Roothbert Fund.