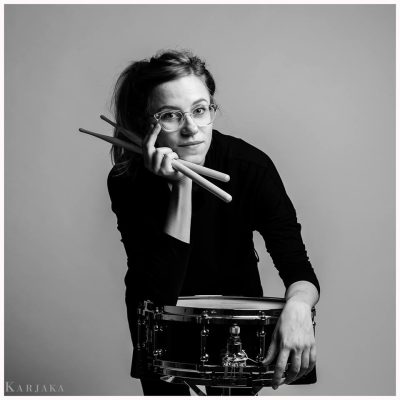 Clara Warnaar is a percussionist, drummer and composer living in New York. A member of the International Contemporary Ensemble, Clara tends towards collaborative, devised and interdisciplinary projects. As the drummer for the band Infinity Shred, Clara thrives at the intersection of rock, electronic, improvised, and composed music, and is sought out as a drummer and collaborator for having this particular versatile blend of skills. She is currently subbing on the Broadway show "Into the Woods,"

In addition to the International Contemporary Ensemble, Clara has appeared as a guest artist with So Percussion, Yarn/Wire, the Bang on a Can Orchestra, Ensemble Signal, Nouvel Ensemble Moderne and the American Modern Ensemble. Recent projects include: “The Force of Things” by Ash Fure and Adam Fure, “PLACE” by Ted Hearne and Saul Williams (BAM), “Proving Up” by Missy Mazzoli (Opera Omaha), “Reich/Richter” by Steve Reich (The Shed), and “Playground/Run” by Ellen Reid.

Clara's playing can be heard on numerous recordings, including on the Grammy-nominated recordings of music by Missy Mazzoli and Ted Hearne. She has performed on and written music for the three most recent Infinity Shred albums, and has recorded drums with antiphonal chamber metal band, “Real Loud”. She has also appeared on major film soundtracks, including “The Fate of the Furious” and “Teenage Mutant Ninja Turtles”.

Clara’s own music merges field recordings, classical music and electronics, to create sound environments that evoke magic realism. To date, she has put out three solo albums, and has been commissioned by Pathos Trio to write a piece for piano and percussion which will be premiered in 2023.