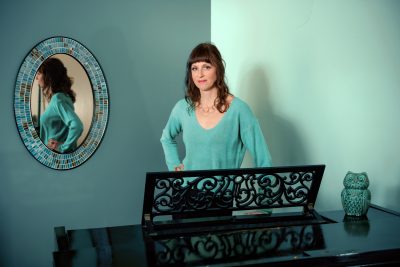 Cheryl B. Engelhardt is a composer and songwriter.

Cheryl started her music career as an advertising and film composer in NYC, garnering several scores for nationally-airing commercials before hitting the road with her pop band. Her music has also been heard on dozens of TV shows and meditation apps like Insight Timer and Simple Habit.

She’s a composer for social justice choirs and was featured in People, Harper’s Bazaar, and Forbes Magazines for her collaboration with Martin Luther King’s goddaughter, Donzaleigh Abernathy, in her song “The Listening”. Another recent project, A Seeker’s Slumber, her second New Age record that features GRAMMY-winner Joanie Leeds, topped sales charts in 2021. Her newest endeavor in New Age is her project “The Passenger” where she was the first person to create a full album, from start to finish, on a cross-country Amtrak train journey to be released in 2022. Cheryl is quickly becoming known as the impact-making, experiential composing, anxiety-quelling, experimental New Age artist with a bit of edge.

Cheryl is a sought-after speaker, moderating panels at SXSW, ASCAP Expo, and many universities including her alma mater of Cornell University.