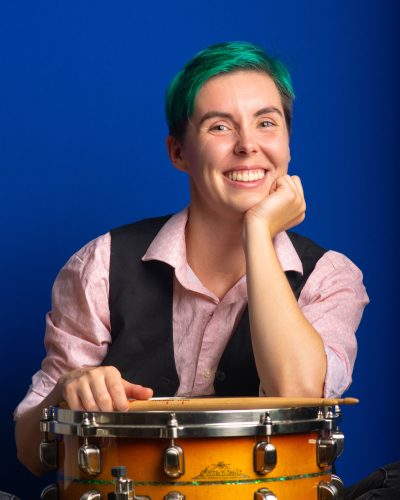 Caroline Moore is a drummer, percussionist, and arranger. She graduated from Berry College with a Bachelor of Arts degree in music, and graduated from William Paterson University in spring 2021 with a Masters in Jazz Studies and Arranging.

They had the pleasure of performing in the Czech Republic and Austria, in Prague, Vienna, and Salzburg, accompanying choir with percussion. They have also played in pits in the Georgia/North Carolina area including the Highlands Playhouse, with the musicals Guys & Dolls and Damn Yankees.

A Brooklyn resident, Caroline works as a freelance musician on drums and percussion. They have currently been active in the jazz, musical theater and pop scenes in NYC, performing in pits for musicals Pippin, Sister Act, and more. Performances in the NYC area include venues such as Feinstein’s/54 Below, Greenroom 42, Tisch New School on Broadway, and Chelsea Table & Stage.

Currently, Caroline is a sub musician on Broadway for the musical Six and actively touring with the Six Boleyn national tour.