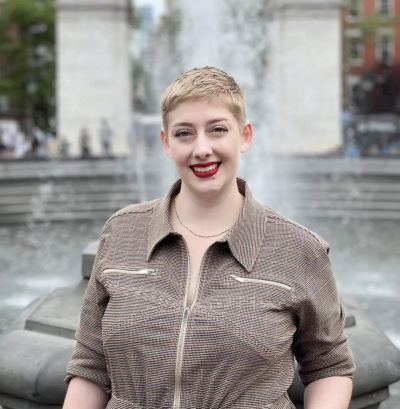 Brooke Trumm is a composer, percussionist, and teaching artist in New York, NY. She has her Bachelor’s Degree in Music Composition from the University of Idaho, and her Masters in Musical Theatre Writing from New York University. Some of her writing credits include original music for Classical Ballet Academy in Portland, OR, orchestrating and writing original musicals, and other freelance composition work. Most recently, she wrote for Rattlestick Playwright Theatre's "Village Song," and Lincoln Center's "Broadway's Future Songbook" series. She is writing an animated rock musical alongside bookwriter and lyricist Kerry Kazmierowicztrimm called "Pandora Rocks" which you can learn more about on her website: https://www.trummmusic.com/pandora-rocks

Brooke has been an active percussionist for 16 years. She performs all over New York City with various artists and bands, most recently at the Bowery Electric and Feinstein's/54 Below. She has played for every kind of ensemble under the sun, from symphonies and orchestras to rock bands or Samba ensembles. She currently performs with artist Caroline McQuaig, and recently played for the New Studio On Broadway production of "Then She Ran".

In 2020, and 2021, Brooke was selected for the Maestra Mentorship Program to be mentored by Emily Grishman in music preparation (2020) and by Dena Tauriello in Broadway drumming (2021).

After studying with Emily Grishman, she has gone on to Music Assist for several workshops under writers such as Curtis Moore, Amanda Green, Nell Benjamin, and Tom Kitt.