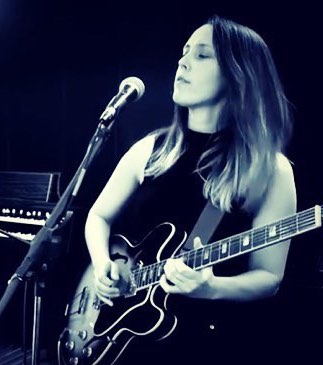 Beth Callen is a guitarist & multi-instrumentalist, a bandleader, singer/songwriter and educator based in NYC. Beth plays Guitar 1/Banjo in the Tony Award and Pulitzer Prize-Winning musical A Strange Loop on Broadway. She also writes music, consults and teaches Songwriting at Purchase College and has a roster of private students.

Beth has been writing songs and singing since she was young, and after studying songwriting at Purchase College she released several albums with her band The Callen Sisters in the early 2000s and was signed to Cordless Recordings (Warner).

She has also worked as a side musician playing guitar and singing with bands and artists in NYC including Grammy-award winning children’s artist Tim Kubart, the all-female Guns N' Roses tribute band Guns N’ Hoses, The New Tarot and others.

Her recording credits include projects with The Callen Sisters, The New Tarot, cast albums for A Strange Loop (Broadway and Off-Broadway Original Cast Recordings) and for We Are The Tigers (Original Off-Broadway Cast Album).

She has continued to write and produce songs and plans to release her first solo project in 2022.