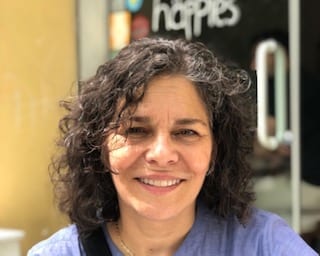 Arden Kass is an award-winning playwright, librettist, screenwriter and independent producer of live theatre. Born and raised in New York, Arden studied poetry and comparative literature at Cornell, slogged through every paid writing gig imaginable, then pledged her heart and considerable passion to the pursuit of theatre and film projects that feel personally satisfying and meaningful. (Her theatre projects, especially, focus on the lives and experience of women.) In 2018, her all-women vaudeville show with live music, Behold Her: Five Thousand Years of Jewish Women and Beauty, premiered at the National Museum of American Jewish History. A two-time Pennsylvania Council on the Arts Fellow, in 2015, Arden conceived a live documentary-style play dramatizing the real-life consequences of the dismantling of Pennsylvania’s public education system. Crafted with two partners from over 100 interviews with Pennsylvania residents, School Play premiered at the National Constitution Center in Philadelphia in April 2015, and toured for three weeks across the state. Ardenʼs plays and interdisciplinary works have been produced and developed in Philadelphia and New York. Her drama with music, Appetite, developed at the 2009 PlayPenn Conference, was a 2014 semi-finalist for the O’Neill Theatre Conference. In 2013, it was given an industry presentation at London’s Royal Academy of Dramatic Art with distinguished actors including Miriam Margolyes, Tamsin Grieg, Jemma Redgrave, and Jason Isaacs. She has been a finalist at Red Bull Theatre and the Humana Festival. In addition to her screenwriting partnership with Mark Gallini, she has worked as a freelance scriptwriter and copywriter, published cultural essays and features, written TV episodes on rock stars for A&E Biography and performed her first-person monologues on WXPN Radioʼs Morning Show. Arden is a member of the Dramatists Guild, Playwrights Gallery and BMI Musical Theatre Workshop in New York and has raised two wonderfully functional young adults, each with a lively social consciousness.