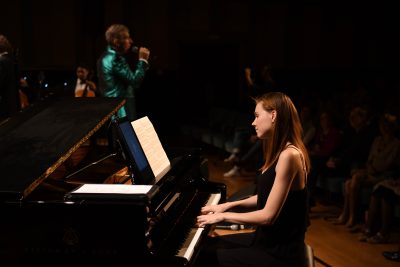 Anne Van Steenwinkel is a 29-year-old musician and composer from Belgium. In August 2022, she moved to State College to study as a graduate student in Music Directing.
In 2016, she obtained her master's degree in Music Production.
As a composer, she wrote music for The Belgian Session Orchestra and The Brussels Operette Theatre. She is the founder of the production house “Poolster Producties”, for which she wrote two musicals.
Six years ago, she played her first musical as a pianist. Since then, she has played and conducted eighteen productions in Belgium, including Sweeney Todd, Mamma Mia, and The Sound of Music.